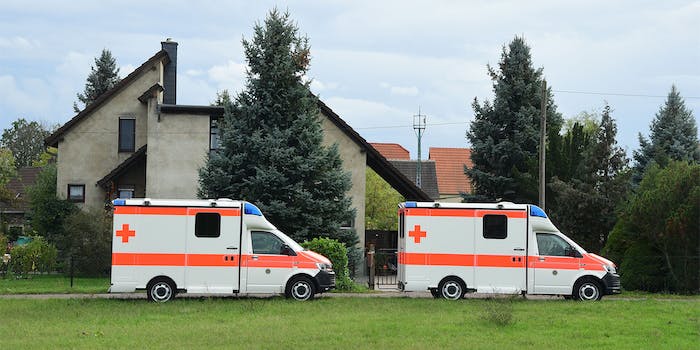 Clips claiming to be from the original 35-minute video are circulating on social media.

The man allegedly responsible for the synagogue attack in Halle, Germany this morning that left two people dead and at least two others injured live streamed it on Twitch, the Independent reports. MSNBC and the Verge report that Twitch confirmed that the shooting was live streamed on its platform.

In a statement to the Verge, Twitch said, “‘We are shocked and saddened by the tragedy that took place in Germany today, and our deepest condolences go out to all those affected.”

In the video, reminiscent of the Christchurch shooting, the man reportedly denies the Holocaust, and rails against feminism and mass immigration, which he blames on the Jewish people. The Independent reports that the International Centre for the Study of Radicalisation verified the footage.

Videos purporting to be clips from the original, which was removed from Twitch shortly after its discovery, circulated on Twitter this afternoon.

In one posted by German news outlet Terreur & Crime Nieuws, a young white man with a shaved head sitting in the driver’s seat of a car points the camera at himself and says, “Hi, my name is Anon, and I think the Holocaust never happened. Feminism is the cause of declining birth rates in the West, which acts as a scapegoat for mass immigration, and the root of all these problems is the Jew.”

Another video posted by a private Twitter user is violent and disturbing. The one minute and 21-second clip, apparently cut from the original live stream, begins with the wearer driving. The individual pulls up outside a synagogue on a street that appears identical to the footage shown in news clips from the shooting. Their car, a grey Volkswagen, also matches footage from the scene.

Breathing heavily, the person tries and fails to get into the synagogue. Cursing in German, the person, whose voice sounds male, turns and shoots what appears to be a high-powered rifle at a car driving past. As it stops, then proceeds again, the footage shows a person lying motionless on the ground next to the Volkswagen, apparently shot.

(The Daily Dot is not linking to the footage to protect the privacy of the victim and their family, and to avoid further circulating it.)

The video then shows the shooter, still firing, head into a nearby restaurant. News reports state that the shooter killed the second victim in a kebab shop after failing to breach the synagogue. A shopkeeper and an elderly patron heaad into the back of the restaurant as sounds of a weapon being reloaded are heard.

Media reports claim that the original footage is 35 minutes long.

German media report that the shooter was a 27-year-old man with far-right views, according to DW News. The outlet reports that Germany Interior Minister Horst Seehofer said, “Based on current information, we have to assume that it was at least an anti-Semitic attack.”

Leaders from around the world issued statements condemning the tragedy. In a statement, a spokesperson for German Chancellor Angela Merkel said, “Our solidarity to all Jews on the holy day of Yom Kippur. Our thanks to the security forces who are still on the case.”

Police report that one suspect is in custody. It is unknown whether others were involved in the attack.