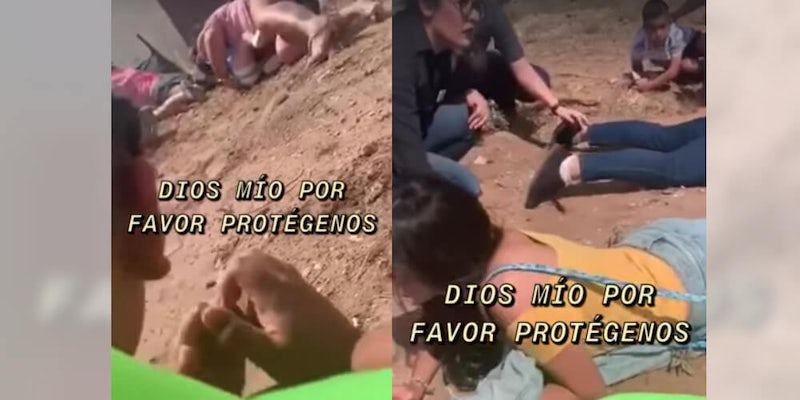 'My God, please protect us.'

A gunman went on a shooting rampage in Odessa and Midland, Texas, on Saturday, killing seven and injuring 22 more. A horrifying video posted to Facebook captured the moment a family took cover during the shootout between the gunman and police.

The 51-second video, which is captioned “Dios Mío Por Favor Protégenos” (“My God, please protect us”), was posted by Antonio Orozco Garcia and shows a group of adults and children on the ground, in the dirt, trying to protect themselves from the gunshots. They were near the movie theater where police ultimately shot and killed the shooter.

When gunfire starts to blast in the background, children begin fearfully screaming and crying.

“It’s OK, we’re gonna be OK,” the voice tries to reassure the group.

At one point, the man recording the videos climbs on top of one of the children to shield the child from any potential gunfire. “I got you,” he says to the child.

When the gunshots can be heard settling down, the man asks everyone in the group if they are OK. It appears that no featured in the video was injured.

The gunman was reportedly pulled over by state troopers, which is what set off the deadly rampage. Police have yet to identify the gunman but have said that he is a white male in his mid-30s. Odessa Police Chief Michael Gerke said at a press conference that the gunman used an AR-type weapon. A 17-month-year old was among those injured in the shooting.

The Daily Dot has reached out to Antonio Orozco Garcia.