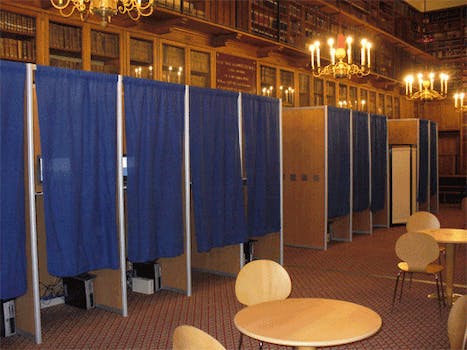 I need help find the place where I throw the bums out.

Voters in Georgia looking to swing by a polling place on their way to work received a rude awakening on Election Day, as the state’s official polling-place locator website went offline for much of the morning.

Many Georgians likely typed a variant of the search query below into Google in an attempt to find the voter information tool on the Georgia Secretary of State’s website.

But, when they clicked on the link, all they saw was:

The site was down for much of the morning. At least a few people were not particularly happy about the glitch.

Polling place locator on State of Georgia Sec of State website is down. Efficient govt in action, @GASOSKemp pic.twitter.com/g8wUrZNARk

However, by about 9am EST, the site was back up—albeit moving slowly, likely due to a heavy load of people trying to find out where they could vote.

Even when the site was down, there were other ways for Georgia citizens to find their polling places:

I voted #aboutaweekago. If you didn’t, vote today. Polls are open in Georgia until 7p. Text GO VOTE to 788683 to find your polling place.

Georgia Secretary of State site is down. Find your polling place here: https://t.co/8NZgpcK5y3

For polling-place searches, there’s always YourF**kingPollingPlace.com, which is kind of like the state’s official polling-place locator but for the whole country and also with considerably more profanity.