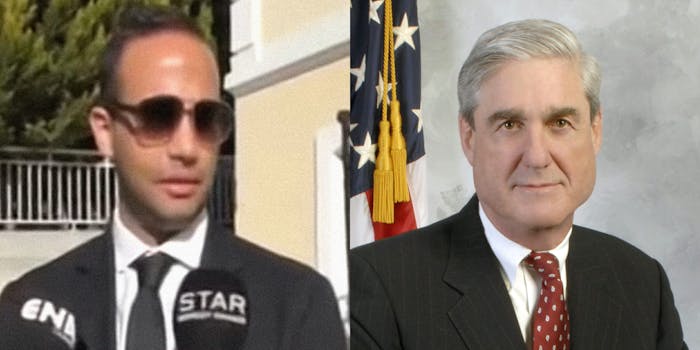 George Papadopoulos has pleaded guilty to lying about the conversations to the FBI.

An adviser for President Donald Trump’s 2016 campaign pleaded guilty to making false statements to the FBI about his interactions with people who had “substantial connections to Russian government officials,” Special Counsel Robert Mueller’s office announced on Monday.

The announcement that George Papadopoulos, a former foreign policy adviser, pleaded guilty to making false statements to FBI investigators came just hours after Mueller’s team announced that former Trump campaign chairman Paul Manafort had been charged with money laundering, among other charges, in a case that some are speculating could be used as leverage to get more information.

Papadopoulos, according to the special counsel’s office, told the Federal Bureau of Investigation that he had “interactions” with a professor who he understood to have “substantial connections to Russian government officials” who claimed to have “thousands of emails” of “dirt” on 2016 Democratic presidential nominee Hillary Clinton before he became an adviser to Trump.

However, according to officials, Papadopoulos knew the information only after he joined the campaign.

The guilty plea by Papadopoulos represents the clearest evidence of members of Trump’s campaign attempting to connect with Russia’s government ahead of the 2016 election.

Papadopoulos also admitted to lying to federal agents about his interactions with a “certain female Russian national” who, according to court documents, he tried to use to set up a meeting between Russia and the Trump campaign. Papadopoulos was told by the professor that the woman was the niece of Russian President Vladimir Putin, a detail that turned out not to be true.

Papadopoulos emailed a Trump campaign supervisor after the meeting in March 2016 and said the topic of discussion was “arrange a meeting between us and the Russian leadership to discuss U.S.-Russia ties under President Trump.”

Later that month, Papadopoulos attended a “national security meeting” also attended by Trump and other foreign policy advisers for the campaign where he “sum and substance, that he had connections that could help arrange a meeting between then-candidate Trump and President Putin.”

In April 2016, Papadopoulos met the professor in London where he told the campaign adviser that he had learned Russia obtained “dirt” on Clinton including “thousands of emails,” according to court documents. Papadopulos continued to email campaign officials and the Russian connections in an effort to “arrange a meeting between the campaign and the Russian government,” the documents indicate. The promise of “dirt” on Clinton echoes the promises allegedly made by a Russian lawyer who met with Donald Trump Jr., Manafort, and son-in-law Jared Kushner in Trump Tower last June.

Through mid-June and mid-August 2016 Papadopoulos also pursued an off-the-record meeting “between one or more campaign representatives and members of President Putin’s office,” the court documents read.

When interviewed by federal agents in January 2017 as part of the investigation into Russian interference in the 2016 election, Papadopoulos made false statements and “omitted material facts” regarding his connections and interactions, according to his guilty plea.

Following a second meeting with the FBI in February, Papadopoulos deactivated his Facebook account—which contained information about his communications with Russian nationals—and created a new one without the information. Shortly after, Papadopoulos ceased using his cellphone number and began using a new one, according to the court documents.

He was arrested on July 27 after arriving at Dulles International Airport.

Papadopoulos graduated DePaul University in 2009 and served on Housing and Urban Development Secretary Ben Carson‘s presidential campaign, according to the Washington Post.

You can read the statement of offense regarding Papadopoulos here: