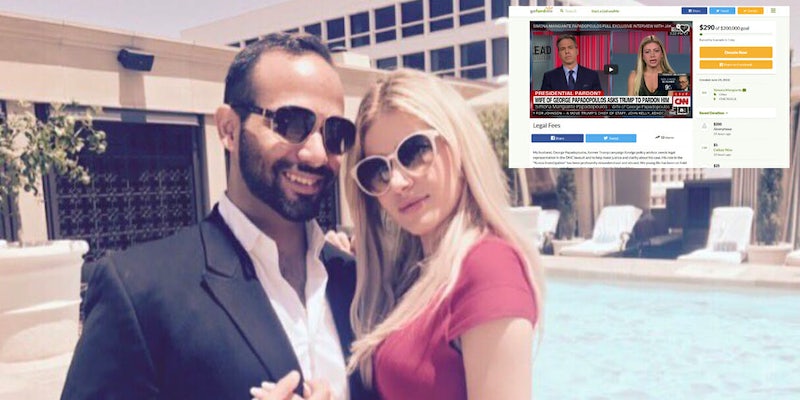 A GoFundMe page started by his wife has raised only $290.

The wife of George Papadopoulos, the former adviser to President Donald Trump who pleaded guilty to lying to investigators as part of Special Counsel Robert Mueller‘s probe, has set up a GoFundMe page to help cover the costs of his “legal fees.” But not many people seem interested in contributing.

The page, which launched on Sunday, has raised $290 as of Monday afternoon from six people. The donations range from $5 to $200, which was made by an anonymous person on Sunday night.

In a description for the GoFundMe, Simona Mangiante Papadopoulos said the “legal fees” that are collected will be used to “fight in the interest of justice.”

“His role in the ‘Russia Investigation’ has been profoundly misunderstood and abused,” Mangiante Papadopoulos wrote. “His young life has been on hold for too long now, and all our savings are now exhausted in legal fees.”

Mangiante Papadopoulos did not immediately respond to a request for comment by the Daily Dot.

Earlier this month, the former Trump adviser’s wife said she hopes the president will pardon her husband.

Papadopoulos pleaded guilty to making false statements to the FBI last October as part of Mueller’s ongoing probe into Russian interference in the 2016 election.

There has been speculation that the former Trump aide has been cooperating with Mueller’s probe.

Since then, his wife has defended him during public appearances.

In an interview with local television station in Chicago, Mangiante Papadopoulos said her husband did not wear “a wire” as part of the cooperation with Mueller.

“I can tell you quite surely that he never wore a wire I would have noticed that,” she said. “When he started the cooperation … he couldn’t have any contact with the Trump administration directly, indirectly, so why would he wear a wire … to talk with whom?”