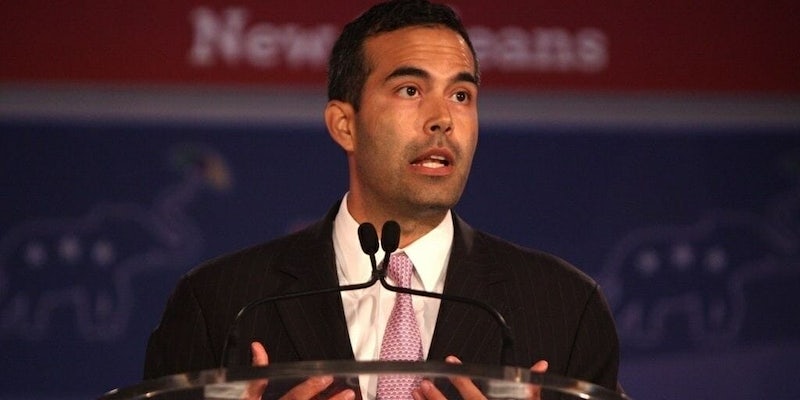 How must his dad feel?

For the most part, the Bush family is not a fan of Donald Trump. George W. Bush has defended the free press against Trump’s attacks, Jenna Bush-Hager has had no problem subtweeting the current president, and George H.W. Bush has called him a “blowhard.”

And of course, you’ll remember the nasty Republican primary campaign between Trump and Jeb Bush.

But not everybody in the Bush clan has turned away from Trump. Instead, George P. Bush—the son of Jeb, the nephew of George W., and the grandson of George H.W.—fully endorsed Trump on Friday at the Texas Republican convention.

According to the Dallas Morning News, George P. Bush, the Texas land commissioner, said, “Are we gonna stand up for President Donald J. Trump. Are we going to reject the fake news and the liberal media? … Yes we are.”

Although some of Trump’s nastiest barbs during the 2016 campaign were reserved for Jeb Bush—Trump repeatedly called Jeb “low energy,” used Barbara Bush in an attack ad against him, and mocked him with a neo-Nazi Photoshopped image—his son apparently is all about Trump.

As Vanity Fair reported, George P. Bush—whose mother is Mexican-American—was the only family member to vote for Trump.

“From Team Bush, it’s a bitter pill to swallow,” George P. Bush reportedly told fellow Republicans about voting for the man who beat his father in the primary. “But you know what? You get back up and you help the man that won, and you make sure that we stop Hillary Clinton.”

Trump, meanwhile, has been helpful to Bush.

With Bush embroiled in a tough primary for Texas land commissioner earlier this year, Trump endorsed him with a tweet, writing “Texas LC George P. Bush backed me when it wasn’t the politically correct thing to do, and I back him now.”

But Bush isn’t the only Texan to embrace Trump even after Trump has blasted a family member or a loved one. Trump basically called Ted Cruz’s wife ugly during the campaign, and ever since Trump beat him in the Republican primary, Cruz can’t stop gushing about the president.