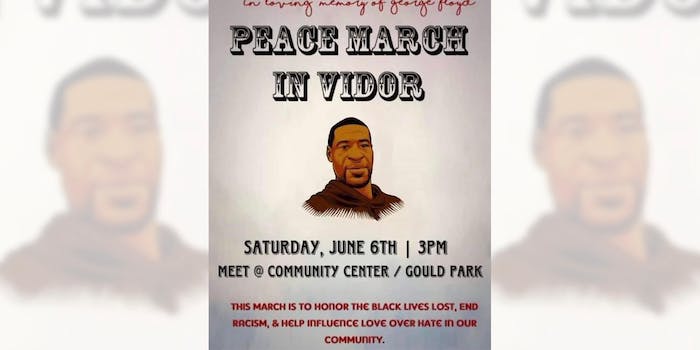 The peace march in Vidor, Texas has drawn plenty of skeptics online.

As thousands of people continue to protest the death of George Floyd, one could reasonably expect to see anti-racism or anti-police brutality demonstrations pop up in almost any city across the United States. Vidor, Texas would not be one of them.

The east Texas town of roughly 10,000 people used to be known as a “sundown town,” an all-white area that was inhospitable to Black people and had signs warning that they couldn’t be there after dark. Vidor was also a known Ku Klux Klan haven, and in 1993, the KKK marched through the town in response to the federal government bringing several Black families into the town’s public housing. If one were to make a list of U.S. towns most resistant to social progress, the Vidor of yesteryear would land near the top.

But some residents are more committed to change. Maddy Malone and Yalakesen Baaheth have organized a “Peace March In Vidor” for June 6. “This march is to honor the Black lives lost, end racism, & help influence love over hate in our community,” the flyer reads.

“I had a small group of my friends, I said, ‘OK, let’s do something different. Let’s have a march in Vidor,'” Malone tells the Daily Dot. “I thought, we’ll post it on Facebook, maybe 20, 30 people will show up. Not anything crazy.”

Not exactly. After Malone shared the event in the Vidor Talk Facebook group, the flyer spread like wildfire on social media. Given Vidor’s unsavory history, many people weren’t buying it, chalking the march up to an attempt to lure Black people to the town.

“Do. Not. Step. Your. Black. Asses. Into. Vidor,” Twitter user @MsDyna85 implored in a post that has been retweeted nearly 6,000 times.

Many widely circulated tweets highlighted the town’s racist history, saying that the protest could be a trap.

“THIS IS A KNOWN WHITE SUPREMACIST / KKK TOWN IN TEXAS OFF I-10. THIS IS NOT A PROTEST BUT A LYNCHING DISGUISED AS ONE. ALL POC—STAY OUT OF VIDOR,” @Lex_Lu wrote.

Some people thought Malone was a bot. She says she received hundreds of DMs questioning the legitimacy of the march or calling it outright fake. Malone responded to several skeptics on Twitter on Thursday, but when Malone attempted to log back into her account later that day, she found she had been locked out. Apparently, somebody had hacked her account and begun posting profanity-laden tweets, which were out of character for Malone.

“I guess somebody hates me that much ’cause I’m doing this, that they would do that,” she says in regards to the alleged Twitter hacking. “I’m not even sure how that happens.”

Some Twitter users have insisted that Vidor’s days as a KKK hotbed are long behind it. Yet others are reluctant to believe the town has changed that much—and they’re not keen on finding out with their own eyes.

“People have been saying ‘the Klan left Vidor in x’ over and over for decades. Evidence says otherwise,” @erinnthered tweeted. “It may be less overt, but it’s still there. That ‘outside agitators’ thing is a white supremacist talking point, so be careful who you believe.”

Despite the pushback online, the “Peace March In Vidor” is still set to take place tomorrow, albeit with a much larger estimated crowd than Malone’s original projection of 20 to 30 people. Malone and Baaheth coordinated with local EMS and police to ensure order at the march, which will also feature speakers from the NAACP Beaumont Branch, about 10 miles west of Vidor.

Vidor police chief Rod Carroll helped secure the town’s Raymond Gould Park as a site for the march. Born in New York and raised in Plano, Texas, Carroll has served as chief of Vidor’s police department for three years. He’s optimistic that the march will go off without a hitch, but he also knows it will take a lot of work to move past the shadow of the town’s racist past.

“I’m praying it’s peaceful,” Carroll says. “All I have to have is one idiot show up and drive-by with a Confederate flag, and it’ll set us back 50 years.”

“We want to show people that there is peace…and that there can be peace when we disagree,” Malone’s longtime friend and co-organizer Yalakesen Baaheth says via Facebook message. “Not one life matters more than another, so let’s uphold that in court.”

Despite the online backlash, Malone is resolute in holding a peaceful march on Saturday to demonstrate that at least some modern-day Vidor residents are eager to keep the town’s racist past just that—the past.

“Some of the things that have happened here, they’re disgusting and they’re terrible,” Malone says. “And we want to raise awareness to that, and we want to be able to speak up and say that we’re not all the same.”