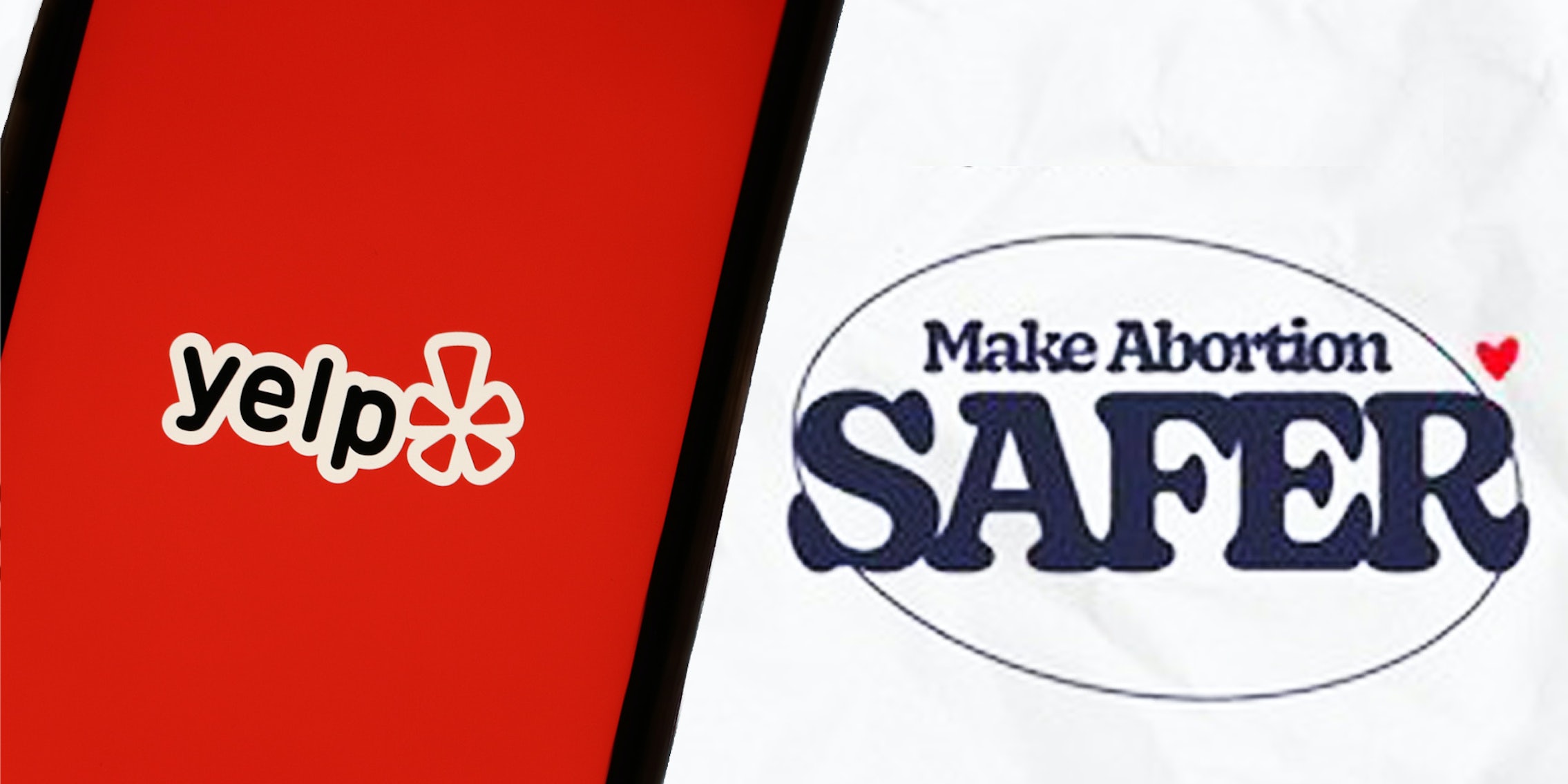 'Made with love by Gen-Z for Change's meddling kids.'

Late last month, the United States Supreme Court dealt the most serious blow to reproductive freedom in a half-century by overturning Roe v. Wade, the landmark 1973 case that legalized abortion nationwide. Advocates for choice immediately took to the streets to protest the unpopular decision handed down by the court’s conservative supermajority.

The tool is part of a multi-pronged initiative called S.A.F.E.R., which stands for Spam fake abortion clinics, Assist abortion seekers, Fund abortion centers, Educate about abortion, and Register to vote.

“Crisis pregnancy centers pose as abortion clinics online but do not actually provide abortions or abortion referrals,” the S.A.F.E.R. initiative site states. “If they refuse to be transparent on their website, we will be transparent in their reviews.”

It adds a nod to their youth, “Made with [love] by Gen-Z for Change’s meddling kids.”

Crisis pregnancy centers, or CPCs, are often criticized for misleading people seeking to terminate a pregnancy into believing that they’re entering an actual abortion clinic when in fact the center exists primarily to talk them out of the procedure. A 2018 article in the Journal of General Internal Medicine states, “Most are affiliated with evangelical Christian networks and national antiabortion organizations.

CPCs have been repeatedly caught lying, shaming, and misleading people. Many operate near legitimate abortion clinics and co-opt the language, signage, and even names of such clinics.

“They usually advertise free pregnancy tests and pregnancy counseling, and some may claim they have other services like STD testing, but these centers don’t actually provide most kinds of healthcare.”

“It’s pretty disheartening to see that even when people try to use their legislative powers to do something, anything really, whether it to curb the climate crisis or ensure rights for women, gay people, Black people, so they’re not getting killed in the street, that an unelected group of nine people gets to come in and say whatever they’re doing it’s not right,” he said.

“…It feels like we’re going backwards, we’re rehashing stuff that’s been already been established for years.”

The tool to spam CPC reviews launched on Tuesday. It creates a fake profile, then automatically posts a one-star review and randomly selects from a list of over a dozen versions of reviews informing people that the facility doesn’t provide abortions.

One states, “WARNING: This is a conservative Crisis Pregnancy Center. They will not give you an abortion here.”

If used on a desktop, the tool can simply run in the background on an open tab, generating a different negative review every 20 seconds. To use it on a mobile device, you need to keep the app open. The tool requires a Google account to work, but uses a temporary email address so it can’t be traced back to you.

“Nothing at all is running on the user’s computer; it’s all running on Google’s servers in the cloud,” Wiggs told the Daily Dot in a phone call on Wednesday. “There’s nothing anybody can do to find this person. And if they did they’d find thousands.”

Wiggs said that Gen-Z for Change is targeting upwards of 2,600 CPCs.

“Yelp does have the ability to just unilaterally shut down a review … but they would have to do it for thousands of clinics across the country individually, and if that’s the case we’ll just move to Google reviews,” he said.

He said that its tool generated over 20,000 reviews on its first day. Yelp intervened less than 48 hours after Gen-Z for Change’s CPC review tool went live.

On Thursday, attempts to review CPCs on its list prompted a message informing them that reviews are blocked.

“This business recently received increased public attention in the news, which often means people come to this page to post their views on the news rather than a first-hand consumer experience. As a result, we’ve temporarily disabled the ability to post content about this business,” Yelp’s message states.

Yelp also seems to have deleted the one-star reviews generated by Gen-Z for Change’s tool.

In a statement to the Daily Dot, Yelp said it supports abortion rights and does not approve of crisis pregnancy centers using misleading tactics, but does not allow spam reviews to stay up on its site.

“Yelp’s mission is to connect consumers with great local businesses by giving them access to reliable and useful information,” spokesperson Julianne Rowe said. “To be clear, Yelp condemns any attempts to mislead people seeking out abortion care. In fact, in 2018, Yelp took action to mitigate the possibility of confusion by manually reviewing more than 2,000 businesses and clinics to improve the accuracy of our categorization of reproductive healthcare providers that offered abortion services and crisis pregnancy centers that steered people to other options—helping people seeking reproductive health care options to see the differences between these facilities. We’ve since continued to regularly audit and investigate these businesses and when we find that a clinic does not provide abortion services, the business is re-categorized as either ‘Crisis Pregnancy Centers’ or ‘Faith-based Crisis Pregnancy Centers.'”

“Since July 5, we’ve seen a large influx of reviews on crisis pregnancy center business pages across the U.S. that do not reflect genuine consumer experiences, and instead are statements of ideological stances. Yelp’s Content Guidelines require that all reviews be based on genuine, first-hand consumer experiences, even in situations where we may agree with other views expressed in these reviews … Yelp has a consistent track record of supporting reproductive rights and abortion access.”

Wiggs said that the tool had posted nearly 27,000 reviews when Yelp pulled the plug. Yelp said that when the uproar dies down, it will go through and certify which reviews are genuine.

“Yelp has a tendency to censor reviews of businesses that garner media attention. Which often includes CPCs and businesses that are exposed for racist or bigoted behavior,” Wiggs said via Twitter direct message on Thursday.

“You don’t see this kind of response when a business receives positive attention due to news coverage. But when leaving honest descriptions of what services are supplied at the business is unacceptable to them.”

Yelp disputed Wiggs’ assertion that it only halted posting on businesses that were getting negative attention, saying that “moderators may place an Unusual Activity Alert on a business page when we uncover an influx of activity in response to a business gaining public attention.”

Wiggs said that he’s now working on a tool to spam CPCs’ Google reviews. He also previously created a tool that flooded a Texas anti-abortion website with fake tips that resulted in it being taken down.