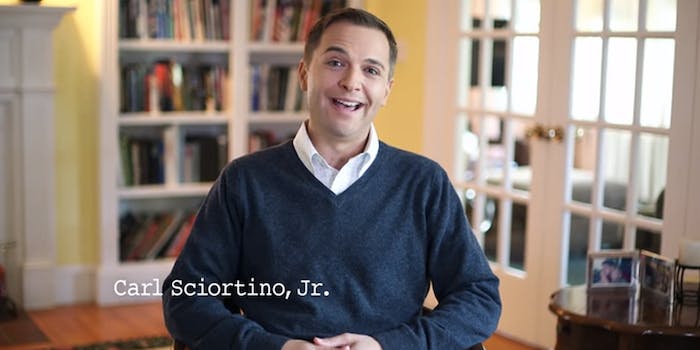 “Massachusetts liberal” Carl Sciortino Jr. enlisted the help of his Tea Party Republican dad in an ad for his run for Congress.

This is the cutest political ad ever. “Massachusetts liberal” Carl Sciortino Jr. enlisted the help of his Tea Party Republican dad in an ad for his run for Congress.

In it, the two generations discuss the points on which they disagree, but say they still love each other in the end.

Sciortino Jr., a Democrat, is making a congressional bid to succeed Ed Markey as a U.S. Representative for Massachusetts’s 5th district. He is just 35 years old and is one of seven openly LGBT members of the Massachusetts General Court as of 2009.

His campaigns have been supported by both MassEquality and the Gay & Lesbian Victory Fund. In the video, he jokingly says he had to “come out” to his dad….as a liberal.

The ad is on YouTube and also on Sciortino’s site, the adorably named Carl For Congress. It seems despite their differences, Sciortino Sr. is proud of his son and his work. That much is clear from this heartwarming ad. If only all Democrats and Republicans could get along this well.