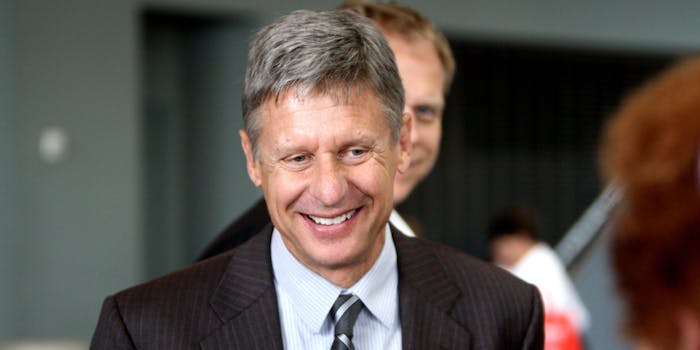 'If, after four years, you decide you don't like peace, prosperity, and freedom, you can always vote a Trump or a Hillary back into office again.'

According to the polls, 2016 could be a very good year for third-party presidential candidates. A survey conducted last month found that nearly half of American registered voters would consider voting for a candidate other then presumptive Democratic nominee Hillary Clinton or presumptive Republican nominee Donald Trump in November.

Hoping to take advantage of that openness is Libertarian party presidential candidate Gary Johnson. The former New Mexico governor is running on a ticket with former Massachusetts Gov. Bill Weld. The two politicians, who both served as Republicans during their tenures in office, released a two-minute campaign ad earlier this week that did something profoundly interesting for a third-party: it aimed for the technocratic political center rather than the ideologically pure extremes.

“As the Governor of New Mexico, I vetoed wasteful spending 750 times, cut taxes 14 times, and left the state with new highways, bridges, schools, hospitals, and a billion dollar surplus without raising taxes a penny,” said Johnson in the minimalist ad featuring the candidate and his running mate talking in front of a solid, white background.

Spending on public infrastructure generally tends to go against libertarian orthodoxy, which holds that government should do as little as possible other than protecting private property rights. However, Johnson’s willingness to champion his record of public investments is a strong indicator of his interest in attracting votes from outside traditional libertarian circles.

“As governor of Massachusetts, I cut taxes 21 times and took unemployment from the highest rate among the 11 industrialized states to the lowest,” added Weld, though he failed to elaborate on what qualified a state as “industrialized” in the 1990s, which was when Weld last served in office.

Johnson and Weld also highlighted their bipartisan credentials. Both were elected, and then re-elected in Democratic-leaning states that, during their respective terms, exclusively voted for Democrats in presidential elections.

Johnson called for pulling back from foreign military entanglements and using “those dollars here at home,” as well as highlighting the importance of “internet freedom.”

To that latter point, in an interview with the Daily Dot conducted earlier this month, Johnson said he would “put an end” to the mass surveillance of the electronic communications of hundreds of millions of Americans revealed by by former NSA contractor Edward Snowden, asserting that he remains unconvinced that the government’s massive metadata collection program has provided enough relevant information to justify its cost.

While the libertarian party is generally considered to be to the right of the GOP, at least in terms of the role of government, it’s interesting Johnson and Weld seem to be going for the votes of both disaffected Bernie Sanders and the #NeverTrump corner of the Republican party.

A recent poll shows there may be some merit to this approach. The poll found that, while Clinton leads Trump by a five-point margin, adding Johnson and Green party candidate Jill Stein into the mix reduces Clinton’s lead to just one point.

“Give us one term, America,” Johnson implores at the end of the ad. “If, after four years, you decide you don’t like peace, prosperity, and freedom, you can always vote a Trump or a Hillary back into office again.”