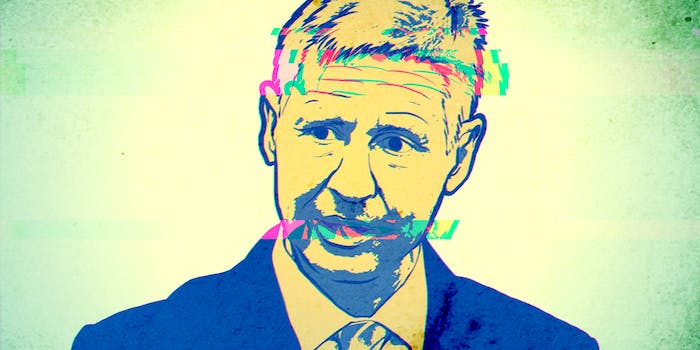 Gary Johnson’s plan to save the internet

Can Johnson make inroads with a frustrated American public?

It’s the middle of the loud Republican takeover of Cleveland and things are getting weird fast.

With the specter of Donald Trump’s big Thursday night speech accepting the Republican nomination looming—and with the Hillary Clinton show coming next week—an incredible and increasing amount of Americans are looking outside of the two major parties to see what their other options are for November.

Libertarian Gary Johnson, who recently hit a new high water mark of 13 points in a CNN presidential poll, is just two points away for qualifying for this fall’s televised presidential debates.

The widespread hostility to both Trump and Clinton means that a Johnson debate appearance would get an awful lot of attention from an American majority that desperately wants to find a way out of the current two party-dominated conversation.

So, for instance, what exactly is the two-party conversation saying about spying, surveillance, and the future of the internet?

The Democratic-Republican presidential debate over Edward Snowden seems, at this point, to have boiled down to whether Trump wants to execute him or Clinton wants him in prison.

Johnson has a different idea that finds significant support among Americans.

“I characterize him as a hero,” Johnson told the Daily Dot. “That he has made us aware of a practice that is despicable.”

The idea that vast, indiscriminate spying on Americans and people around the world is abhorrent has plenty of backers. However, not too many of them are seeking the White House.

Normally, the Libertarian nominee would barely have enough support to have an idea like this heard in the media. But 2016 is a different kind of election year and Johnson, the former Republican governor of New Mexico, is taking advantage as best he can.

Among the anti-NSA bulk spying set, only Johnson has a resume that includes earning 1.2 million presidential votes in 2012. And only Johnson has a future in which he seems guaranteed to exponentially grow that figure and achieve the best results an American third party has seen in two decades.

Johnson has a particular vision for the future of the internet that contrasts starkly to what Trump or Clinton see.

Calling the internet the most important tool for equality ever created, the candidate outlined a Johnson presidency’s impact on the web starting with putting an end to government mass spying, supporting strong encryption technology with no backdoors, and wondering if private industry could do more for internet freedom.

“There is due process,” Johnson said. “If there’s a suspect, let’s hear about him. The judge can order surveillance and then we’ll have at it. But mass surveillance of you and I? I’d put an end to that.”

Johnson argues against criminal prosecution for Snowden, citing especially the Oscar-winning documentary Citizenfour for convincing him that the former NSA contractor acted responsibly, patriotically, and out of great necessity.

Only a third of Americans favor a pardon for Snowden, however. Nearly as many have no opinion at all. Snowden himself is willing to serve a prison sentence.

Every year, the federal government spends tens of millions of dollars on internet freedom projects that circumvent censorship and surveillance to advance human rights. Snowden himself made use of these projects when he blew the whistle.

Tor, the anonymity network that allows users to hide their internet traffic from prying eyes, was developed by and is largely funded by the American government to the tune of millions of dollars annually.

“Could this be provided or would this be provided by the private sector in lieu of the government?” Johnson asked. “It does sound like a noble endeavor but I’m often times—and this is a libertarian perspective—often times because the government gets involved in the delivery of that service, they in essence thwart what would get done privately and perhaps a lot more effectively if it were done privately.”

The 2016 race, like most before it, has been widely painted as a two-person contest. But Johnson’s fortunes are rising and, even if he’s not exactly on the White House’s doorstep, he’s poised to influence the debate—possibly alongside Green Party candidate Jill Stein—to a degree Americans haven’t seen in a long time.

“I’d love to hear your thoughts on this,” Johnson said when we met in New York last month. He had just come from an appearance on Fox News and was getting ready for more media, more exposure, and a louder voice. “I really think I’ll be the next president of the United States.”