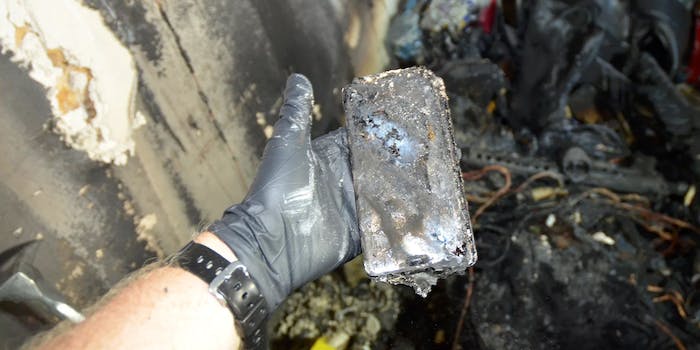 Some mischevious prankster aboard a Virgin Airlines flight named his Wi-Fi network “Galaxy Note 7,” causing the crew to threaten to divert the plane and eventually cancel its next flight out.

Lucas Wojciechowski took to Twitter to tell his story of what happened on Virgin America flight 358 from San Francisco to Boston. Sometime during the flight, a call went out for any passenger with a Note 7 to press their call button. The crew threatened to land the plane if the misbehaving passenger didn’t fess up.

Open my laptop on the plane and notice a Galaxy Note 7 wifi hotspot https://t.co/y1csn9gOsZ pic.twitter.com/9Z5IJULuPs

About an hour into the flight there’s an announcement “If anyone has a Galaxy Note 7, please press your call button”

15 minutes later “This isn’t a joke. We’re going to turn on the lights” (its 11pm) “and search everyone’s bag until we find it”

an additional 15 minutes later “This is the captain speaking…”

“I don’t know if you’ve ever been diverted at 3am… Let me tell you, it is terrible. There is nothing open in the terminal. Nothing.”

The wise guy eventually did good, telling the crew that while they were not in possession of a Note 7, they had changed the name of their Wi-Fi network to ‘Samsung Galaxy Note 7_1097.’ Not cool.

More than 70 Galaxy Note 7s exploded in just the U.S. before being recalled and completely disabled. At least 13 people were injured by the devices over a period of a few months. The device is strictly prohibited on all U.S. flights.

According to Wojciechowski, the flight crew attempted to de-escalate the situation, announcing: “Ladies and gentlemen, we found the device. Luckily only the name of the device was changed to ‘Galaxy Note 7.’ It was not a GN7.”

When the plane landed, Serenity Caldwell, managing editor of iMore, took to Twitter for some more bad news.

“When I got to the airport (early) today, I found a huge line of people at the counter to my gate,” Caldwell wrote. “Turns out, the flight had been cancelled. The plane was mid-flight when an attendant noticed a wi-fi hotspot. A Galaxy Note 7 wi-fi hotspot. Everyone else makes a horrified face.”

Mr. Wojciechowski said he believed no further action was taken against the passenger with the device, according to BBC News.