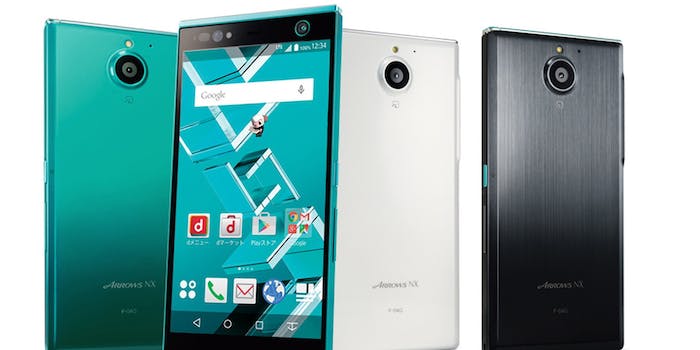 Cool or creepy? This Android phone uses your eye as a password

Apple may have been the first to launch a well-received fingerprint unlock feature on a smartphone with Touch ID, but the honor of the first iris-scanning handset belongs to Fujitsu Limited. The Arrows NX F-04G is a mouthful in name and a handful in size, but its 5.2-inch 1440p display isn’t the phone’s most striking feature.

The iris recognition system, powered by biometric firm Delta ID, uses technology the company calls ActiveIRIS, and depending on your willingness to let a machine log your most personal of information, it’s either really cool or ultra creepy.

A combination of an infrared LED and a front-facing camera with infrared filter allow the phone to identify you with just a glance, turning your eye into a password nobody can fake. Delta ID claims its ActiveIRIS tech can identify a user in less than 150 milliseconds, and has a false acceptance rate of one in 100 million.

The phone itself looks like your average high-end Android smartphone. It runs Android 5.0, has a large high-res display, and packs a big 3,120mAh battery. Those are solid specs, and combined with the iris recognition system, the package is definitely cutting edge.

But is it on the cutting edge of cool tech, or the cutting edge of potential privacy nightmares? The phone just launched on Japan’s NTT Docomo, which happens to be the go-to wireless operator in the country, so we won’t likely have to wait long before public opinion sways one way or the other.