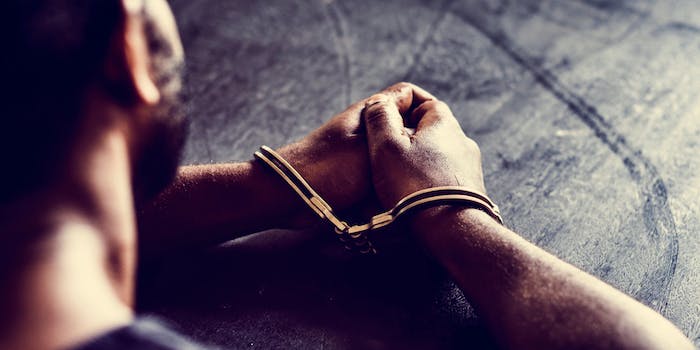 'Nobody has your back.'

A viral video on Reddit of Frank James, the 62-year-old man who was taken into custody on Wednesday in connection with this week’s horrific subway shooting in New York City, has shed light on his hateful views.

James became the sole person of interest in the case after a man in a gas mask and neon vest on Tuesday threw two smoke grenades and opened fire in a Brooklyn subway car, leaving 29 injured and 10 shot.

The incident quickly led to widespread scrutiny of James’ social media presence, which included accounts on numerous platforms including YouTube.

In one such video shared to the popular r/PublicFreakout subreddit, James can be heard arguing that white people and Black people “should not have any contact with each other.”

“They [white people] hate your fucking guts,” James says. “And why do they hate your guts? Because they know that your rightful place is as a fucking slave in this country.”

James went on to claim that whites would soon carry out a genocide against the Black community in the same way Nazi leader Adolf Hitler targeted minority groups.

“Their [white people] anger is building up,” he said. “Nothing can happen here differently than what happened over in Europe with the Jews. I want you to believe that that’s possible.”

As noted by Rolling Stone, James also uploaded frequent videos to Facebook under the username “profitofdoom008” as well. Titles included such names as “should the black woman be forcibly sterilized” and “TO KILL OR NOT TO KILL.”

The alleged shooter repeatedly took aim at numerous racial and ethnic groups such as whites, Blacks, and Jews, and suggested that a race war was a foregone conclusion. James also called Sept. 11 2001, the day of the fateful terror attacks against the World Trade Center, “the most beautiful day in history.”

James even weighed in on the situation in Ukraine, suggesting that the war could be a “false flag attack” used to usher in “population control.”

“And what are you going to do? You gonna fight. And guess what you gonna die. Cause unlike [the] president over in Ukraine, nobody has your back,” he said. “The whole world is against you. And you’re against your fucking self, so why should you be alive again is the fucking question. Why should a [N-word] be alive on this planet, besides to pick cotton or chop sugar cane or tobacco?”

The suspected shooter also appeared to accuse New York City social services as driving him to the brink.

The remarks are just a small handful of the hours worth of hateful content uploaded online by James over the past decade or more. It remains unclear how his videos went unnoticed for so many years.

James was arrested on the street after being recognized by a pedestrian. A police source speaking with the New York Post has allegedly stated that James will be charged by federal prosecutors with terror-related offenses.