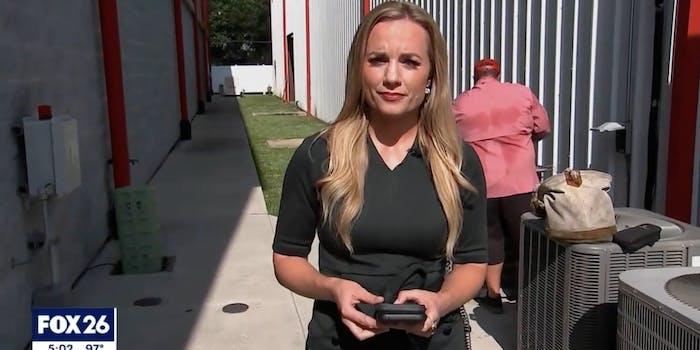 ‘Fox Corp. has been muzzling me’: Reporter boasts she’s leaking to Project Veritas on live broadcast

'I am going to be releasing some recordings about what goes on behind the scenes at Fox.'

Fox 26 KRIV reporter Ivory Hecker claimed on-air that the network has been “muzzling” her and that she will be leaking “behind-the-scenes” recordings to Project Veritas.

“I want to let you, the viewers, know that Fox Corp. has been muzzling me to keep certain information from you, the viewers,” Hecker said during a now-viral broadcast. “And from what I’m gathering, I am not the only reporter being subjected to this. I am going to be releasing some recordings about what goes on behind the scenes at Fox because it applies you, the viewers.”

The Houston-based reporter made the impromptu announcement during what was supposed to be a report on a recent heatwave. She said the network had been censoring her and other reporters, preventing them from sharing information with viewers.

Hecker told Newsweek that in August 2020, she interviewed someone the network did not like.

“They decided they didn’t like what the interview subject had said, and they went on to internally harass and defame me,” Hecker reportedly told Newsweek. “I knew I was not working for a journalistic organization when I was called into an HR meeting in December and was told to keep my support for free speech and opposition to censorship to myself—that those were not matters to be publicly spoken about.”

Newsweek reported that a Project Veritas spokesperson said the recordings will be released on the night of June 15.

While it bills itself as an organization dedicated to exposing corruption and bias, critics of Project Veritas claim that the organization heavily edits its videos and recordings to discredit mainstream media and progressive groups.

When reached for comment, a spokesperson for Project Veritas told the Daily Dot in a statement: “Ivory Hecker is a brave journalist who came to Project Veritas because she cares about the truth. Her tell-all interview will be published today, where she will detail what she experienced at Fox 26 along with recordings to corroborate her story.”

When reached for comment, FOX 26 told the Daily Dot that it “adheres to the highest editorial standards of accuracy and impartiality. This incident involves nothing more than a disgruntled former employee seeking publicity by promoting a false narrative produced through selective editing and misrepresentation.”

The Daily Dot has reached out to Ivory Hecker.