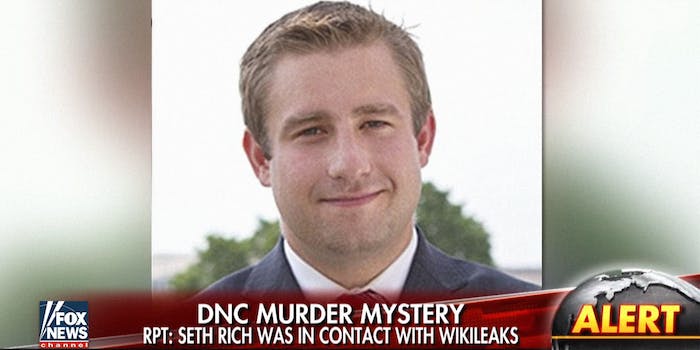 The story helped push a conspiracy theory about Rich's murder into the mainstream.

Fox News has retracted an article it ran last week regarding the murder of Seth Rich, a Democratic National Committee staffer who was shot in Washington, D.C., that claimed he had leaked documents to WikiLeaks.

The Fox News story, which has since been taken down from the television station’s website, built upon a Fox 5 DC story about an investigator for Rich’s death (and Fox News contributor) that seemed to imply Rich was WikiLeaks’ source. The Rich family quickly disputed the story, which has been archived here, as false.

In a statement, Fox News said the Rich story did not meet the organization’s editorial standards. The Rich family and their supporters online had called for Fox News to retract the story. Meanwhile, Fox News host Sean Hannity continued to push the Rich conspiracy theory repeatedly to his estimated 3 million viewers.

“The article was not initially subjected to the high degree of editorial scrutiny we require for all our reporting,” Fox News’ retraction reads. “Upon appropriate review, the article was found not to meet those standards and has since been removed.”

Rich was gunned down walking home from a bar on July 10, 2016. Police say he was killed in a robbery gone wrong, although no valuables were stolen from him. The case remains unsolved with no witnesses coming forward or information leads.

Rich’s death has been the subject of a conspiracy theory that he was targeted by Democratic operatives for leaking DNC emails to WikiLeaks. The U.S. intelligence community asserts that Russian-sponsored hackers stole the DNC emails and provided them to WikiLeaks. Backers of the conspiracy pointed to the timing of Rich’s death—he was killed less than two weeks before WikiLeaks published the DNC emails—and the $20,000 reward Wikileaks offered for information about Rich’s murder.

The conspiracy began to go mainstream when the former detective, Rod Wheeler, went on Hannity and told the right-wing pundit—and ardent Donald Trump supporter—that it was likely Rich had been communicating with WikiLeaks based on information on his laptop.

“When you look at that, with the totality of everything else that I found in this case, it’s very consistent for a person with my experience to begin to think, ‘Well, perhaps there were some email communication between Seth and WikiLeaks,” he said, according to the deleted Fox News story.

Several alt-right media outlets such as Breitbart, Drudge Report, and others ran with the conspiracy theory, with some claiming Rich’s death was a cover-up. Hundreds of people on pro-Trump online communities on Reddit and 4chan also launched efforts to try and solve his murder.

Rich’s family called Wheeler’s claims “unsubstantiated.” Wheeler also backtracked on his claims in an interview with CNN. A spokesperson for the Rich family said they wanted a retraction and apology from Fox News and it’s D.C. affiliate for “inaccurate reporting and damaging the legacy” of their son.

Following Fox News’ decision to retract the article, Hannity took to the radio to address his critics. “For those accusing me of pushing a conspiracy theory, you are the biggest phony hypocrites in the entire world,” Hannity said.