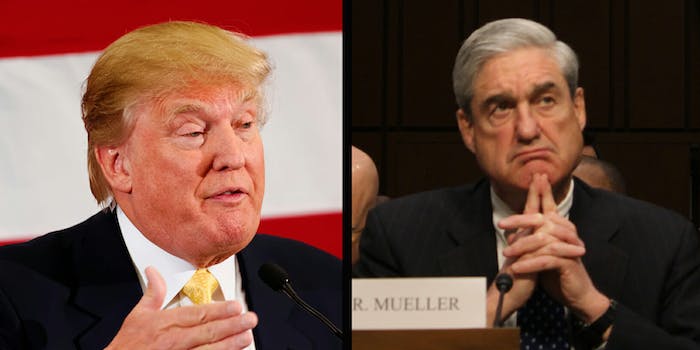 A lot of people also think Trump is going to fire Mueller.

A majority of Americans think Special Counsel Robert Mueller will find that President Donald Trump committed offenses that could lead to his impeachment, according to a new poll by Fox News.

The poll found that 56 percent of those polled thought Muller is “extremely,” “very,” or “somewhat” likely to find that the president committed criminal or impeachable offenses. Only 37 percent said it was not likely that the investigation will end that way.

While many people feel that Mueller will find something to charge Trump with, even more people think the president will fire the special counsel before the investigation is completed. More than 70 percent of those polled said the president will fire Mueller before the end of the investigation, compared to just over 20 percent who didn’t think that was likely, according to the poll.

Fox News found that 64 percent of Americans think Mueller is treating the current administration “extremely,” “very,” or “somewhat” fairly, with 26 percent thinking the investigation has not been fair.

Tensions between the president and the special counsel have been fraught lately. Trump recently said “many people” have told him to fire Mueller in the wake of Michael Cohen, the president’s long-time personal attorney, getting raided by the FBI.

The poll also found that 53 percent of those asked disapproved of Trump’s job performance, compared to 44 percent who were happy with the president.