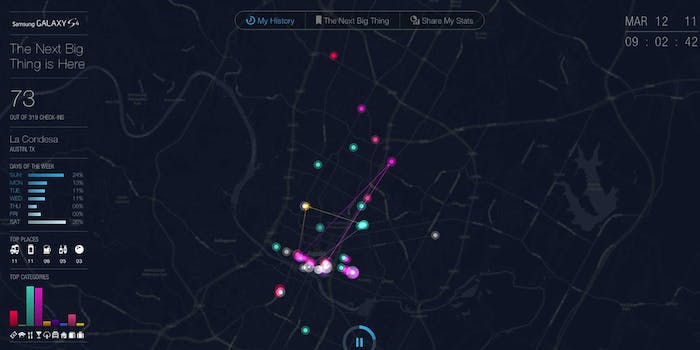 Location check-in social network Foursquare partnered with Samsung to create the Foursquare Time Machine, a website that creates a visualization of all the places you’ve ever checked in using the company’s app. Essentially, it’s a Web version of Dr. Seuss’s children’s book Oh the Places You’ll Go! but with funky, bass-heavy background music.

“Zoom through time and space as you visualize all your check-ins,” the company’s blog post announcing the feature proclaims.

So zoom I did.

To use the feature, one simply logs on with their Foursquare user ID. After that, you just sit and relax as the Time Machine takes you from your first ever check-in and jumps to each subsequent location.

I wasn’t an early adopter of the service—I used Gowalla, a similar service that predated Foursquare but was killed off when Facebook gobbled it up in in 2011—so I only had 319 check-ins in 3 years, and these were sporadic. Even then, the visualization was a somewhat accurate representation of my quotidian life. All but a handful of check-ins were within the same five-mile radius of my house.

Along with the visualization, Time Machine does a statistical breakdown of all your check-ins. I checked in at bars more than any other type of location.

There’s  also “The Next Big Thing,” a feature named after sponsor Samsung’s Galaxy S4 slogan that recommends spots based on where you’ve already checked in. A neat idea in principle, but based on the places it suggested for me, it could use some work. Among my recommendations were various establishments found in the touristy part of town. C’mon.

So what’s the verdict? Time Machine is a clever interactive ad for Samsung masquerading as a nifty little service that doesn’t provide too much value. Nice graphics, though.