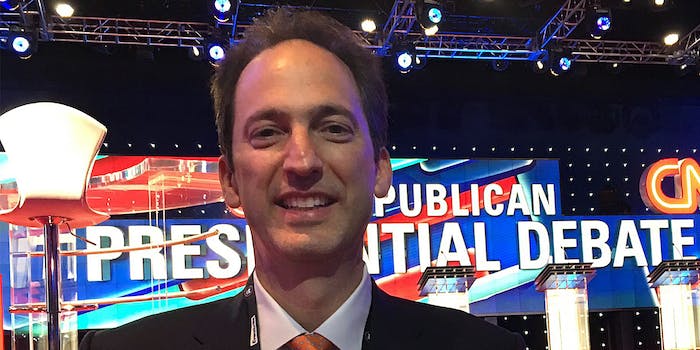 It's a Florida thing.

A South #Florida 7th Grader Gives Gift of Mobility to Children Around the World https://t.co/xkHGqH2aa3 via @nbc6#Sayfie #FlPol

So what is a “sayfie” and why is the Sunshine State so obsessed with it?

Sayfie does not, as one might expect, refer to an alligator chilling by the pool in Crocs and a NASCAR hat hitting the Juul and counting hanging chads. Nor is Sayfie a reference to topless octogenarians flipping the bird and drinking white zinfandel in a white Mustang convertible.

These are excellent guesses, because #Florida, but Sayfie actually refers to one man and his news aggregate website: Justin Sayfie of the Sayfie Review.

Back when he was just another guy toiling away in the spectacular shadow of Jeb Bush’s purple tie, Sayfie grew weary of disseminating news to Florida’s then-governor the old-fashioned way, by cutting stories out of the paper and scrapbooking it up nice and fancy.

“I got a little frustrated that there was no easy place to digitally get all the state’s political news,” Sayfie told Business Insider in 2015.

Inspired by the Drudge Report (yes, really), Sayfie launched the site in 2002. Every morning, he’d read the news, pick out the stories he considered the most important for the people infesting the Floridian political swamp, summarize it briefly, and put it on the site.

For years, this was a labor of love. Then Sayfie realized that his little website and its powerful readership were actually marketable commodities and began selling ads. By 2015, he told Business Insider he charged weekly rates of $3,999 for a banner ad and a cool $99 to link to a press release.

Between that and his conference, a source estimated he was probably netting six figures annually.

To recap: Some guy reads the news, regurgitates it, links to it, and rakes in the dough. Florida publications—technically his competitors—even use #sayfie in their tweets.

All to get the attention of Florida’s Drudge.

So where is Sayfie now? Working as a lobbyist in Washington D.C., of course. He is also still the publisher of Sayfie Review.

And when a man who has his own hashtag gets down in the Gucci Gulch, he really gets down. Justin Sayfie is with Ballard Partners.

Before Trump’s election, Ballard Partners was about as high-powered as it got in Florida lobbying circles; elsewhere, not so much.

After Trump squeezed his way into the White House, founder Brian Ballard, an early and ardent supporter, opened a branch in the nation’s capital. They’ve been raking it in ever since. Seems that greasing the wheels for Nigerian presidential candidates is nice work if you can get it.

In what has proved an extremely savvy move—in two years the firm cashed in $28 million worth of chips—its team may as well have been hand-selected for their ties to Trump World.

Former Florida Attorney General Pam Bondi, recipient of the $25,000 donation from Trump that coincidentally arrived four days after she publicly mulled joining the multi-state case against Trump University, is there.

Trump Florida campaign chair and architect of his 2016 victory in the state, Susie Wiles, is there.

Also there is the guy who parlayed reading comprehension and pithy headlines into a probable six-figure profit margin: Justin Sayfie.

See ma, you can get rich doing the journalism.