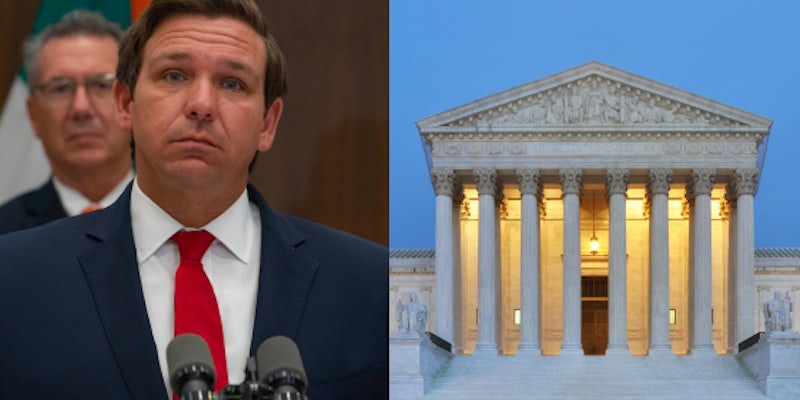 It could have major first amendment ramifications.

After two lower courts struck down portions of Florida’s controversial law that would allow politicians to sue social media companies that deplatformed them, the state wants the Supreme Court to weigh in.

The law makes it illegal for any social media website to ban a candidate running for statewide office in Florida for more than 14 days or face a possible $250,000 per day fine.

Governor Ron DeSantis (R) said the law, which was introduced after then-President Donald Trump was removed from Twitter, would guarantee Floridians “protection against the Silicon Valley elites.”

A federal judge struck down the law in mid-2021 and that was upheld in May of this year by the 11th Circuit Court of Appeals, when a three-judge panel drafted a 67-page opinion unanimously rejecting the legal justification of the law, meaning it hasn’t been enforced since going into effect.

Now, Florida Attorney General Ashley Moody wants the nation’s highest court to rule on the issue. Moody filed a petition on Wednesday urging the Supreme Court to take up the case, calling it an “ideal vehicle” to rule on First Amendment surrounding social media sites.

Florida’s petition asks the court to rule on whether the First Amendment prohibits states from forcing social media companies to host content they might otherwise block or ban. If the Court agrees to hear the case, it could have major ramifications on the future of social media censorship and democracy.

While the Florida law was struck down by the 11th Circuit, a similar law in Texas was just upheld last month, with the 5th Circuit Court ruling that the law did not violate social media companies’ First Amendment rights.

Netchoice, a social media industry group that represents Meta, Google, Twitter, and other tech companies, released a statement expressing confidence that the Supreme Court would rule in their favor.

“We agree with Florida that the U.S. Supreme Court should hear this case, and we’re confident that the First Amendment rights of websites will be upheld,” Carl Szabo, NetChoice Vice President and General Counsel said in the statement. “We look forward to seeing Florida in Court and having the lower court’s decision upheld. We have the Constitution and over a century of precedent on our side.”