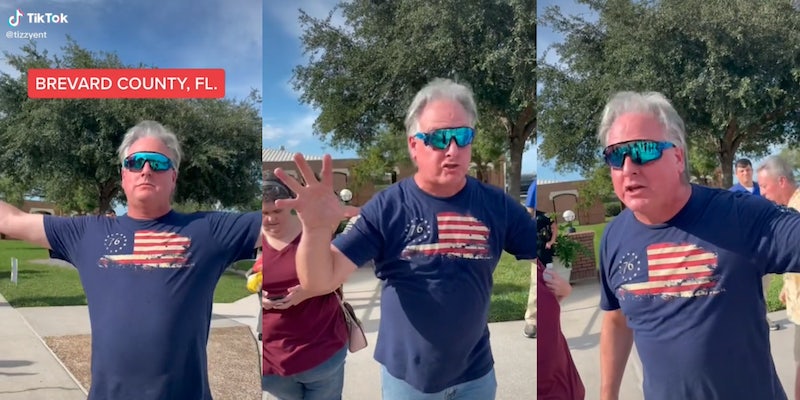 'I know where they all live and we will show up in numbers!'

A Florida man who claims to have participated in the Jan. 6 Capitol riot was filmed threatening to visit the homes of school board members who showed support for mask mandates.

In viral footage uploaded to TikTok last week, the man was seen outside of a school board meeting in Brevard County bragging about his involvement with the failed insurrection before setting his sights on employees of the school.

“No mask will be enforced at the schools because if they don’t like the crowd out here, how do you think they’ll like the crowd in front of their house, which is where this goes next,” the man says.

When asked by a counter-protester filming the interaction whether his remarks were a threat, the man responds with a resounding “yes.”

“I know where they all live and we will show up in numbers!” he says.

The man was also filmed repeatedly stating “make me famous” before noting that he would “come after” anyone who made his identity known.

The video goes on to show the man’s vehicle, which includes a sticker for the “Three Percenters,” a militia movement that advocates for gun rights and resistance to the U.S. federal government.

The TikTok user narrating the footage also notes that the man was seen with an L3Harris keychain, suggesting that he could work for the Florida-based defense contractor and technology company.

While the video also compares the man to a picture of an individual at the Capitol, it remains unclear if they are actually the same person.

The TikTok video has already been viewed more than 3.1 million times. The TikTok user who uploaded the video commented that he would provide an update on the situation on Monday morning but no such video has been released thus far.

Brevard County has been at the center of numerous anti-mask and anti-vaccine protests during the pandemic. A substantial number of arrests linked to the Jan. 6 riot have made been made in Florida and specifically Brevard County.