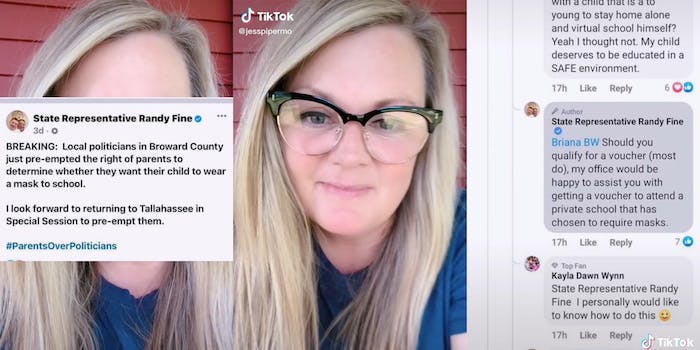 A viral TikTok attacks a Florida lawmaker for telling constituents who want mask mandates in schools to send their kids to private schools that require masks.

After a South Florida county passed a mask requirement for public schools, State Rep. Randy Fine (R-Fla.) posted on his verified Facebook page that he looked forward to returning to the state’s capital “in a Special Session to pre-empt them.” Fine has become a standard-bearer for opposing mask requirements in Florida schools.

When a concerned parent commented that they were afraid their children would get COVID-19 if masks aren’t required, Fine replied, “Should you qualify for a voucher (most do) my office would be happy to assist you with getting a voucher to attend a private school that has chosen to require masks.”

TikToker Jess Piper screenshot this exchange and posted it.

“This lawmaker is writing bills making sure that public schools can’t require masking then sending kids to private schools where they do require masking,” said an incredulous Piper, a teacher and Democrat who’s running for state office in Missouri.

Piper’s TikTok has 230,000 views. Many of the thousands who commented agreed with her assertion that it was a “conspiracy.”

“The final goal is to defund public schooling so the poor don’t become educated,” another top commenter opined.

Fine told the Daily Dot that he supports public schools, charter schools, and vouchers, which allow people to receive state stipends to pay private school tuition. He insists he wasn’t telling parents to send their kids to private school, however.

“I’m not encouraging parents to get vouchers to send their kids to private schools,” he said. Fine added that he doesn’t support mask mandates, but said, “I also respect parents who want one.”

“This was a potential option for this parent to get what the parent wants,” he said.

He was surprised to learn that his comment had gone viral on TikTok, and lamented the state of political discourse.

“No one seems to respect the views of people who don’t agree with them,” Fine said.

Correction: Piper is a candidate for office in Missouri, not Montana.