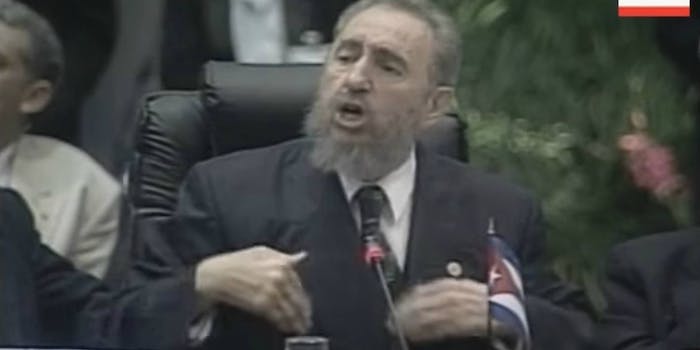 Fidel Castro is dead, and much of Twitter is celebrating

Longtime Cuban leader Fidel Castro died late Friday at the age of 90, according to Cuban state TV, and those Twitter users who hail from—or whose families hail from—Cuba were in a celebratory mood. Mostly, they were just ecstatic that their elderly family members who we assume fled Cuba to escape Castro’s dictatorship lived to see the day that Castro would be buried in the ground.

My abuela outlived him that's all I care about https://t.co/j45IaDOZ1J

@nypost my great grandparents, Cuban immigrants, have outlived him. They'll wake up to good news.

Lmao my mom and grandma are celebrating that Fidel Castro died

I think Fidel is finally dead. And my grandpa, grandma, and mom rejoice. 🇨🇺🎉

Just called my mom to her to tell her Fidel Castro was dead. I only wish I'd been able to make the same call to my Abuelo and Abuela.

Cuban friends telling me parents are crying of relief, one is going to buy champagne now. One's parents saved a bottle to drink when he died

As we know, 2016 has been a year filled with celebrity loss, from David Bowie to Leonard Cohen and from Gene Wilder to Garry Shandling. As far as world politics are concerned, none are bigger than the death of Castro, who ruled Cuba for nearly 50 years and who outlasted 11 American presidents. And for many people on social media, none of those deaths have brought them greater joy.