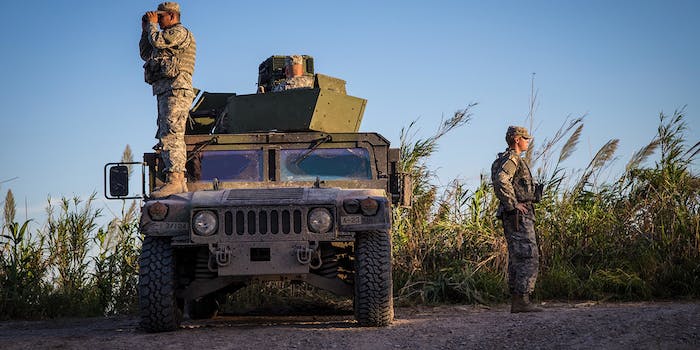 The National Guard/Flickr (CC BY 2.0)

The military refers to Ferguson protestors as 'enemy forces' and 'adversaries' in internal briefing emails.

The National Guard used highly militarized language in its communication while planning to engage protesters in Ferguson, Mo., last year according to information obtained by CNN in a Freedom of Information Act request.

When the National Guard deployed to Ferguson, it was to quell unrest. Outraged citizens, upset over the shooting death of Michael Brown by Darren Wilson, and further incited by the lack of indictment, took to the streets. Peaceful protesters marched and demonstrated. Some instigators threw rocks and bottles. Police responded with a heavy hand, showing up in full riot gear with armored vehicles and assault weapons, tear-gassing entire crowds.

This helped to underscore the opposition between the community and law enforcement officials and intensified the situation. Things escalated. There was looting and vandalism. Riots broke out. Authorities allegedly used excessive force in suppressing dissent. Cops were caught on camera threatening citizens and journalists. Critics accused police of planting plain-clothes officers to incite riots so they could disperse demonstrations. Curfews were imposed. The library became a safe space.

The National Guard was called in to help calm things down.

The email evidence in CNN’s report bears witness to the startling revelation that when planning to engage protesters, the National Guard used vernacular more appropriate for a foreign battle field.

Rather than referring to them as “people” or “U.S. citizens exercising their constitutional right to freely assemble and petition their government for a redress of grievances,” protesters were referred to as “enemy forces” and “adversaries” in internal briefings which outline the National Guard’s ground engagement strategy with demonstrators as a military mission.

National outcry about the militarization of law enforcement was swift and loud in response to videos of what was happening in Ferguson. The National Guard quickly heard and responded to public pressure.

“We are deliberately constraining mobilization timelines to the last couple days to minimize backlash from calling up the NG early,” Col. David Boyle, Army chief of staff at the Missouri National Guard, wrote in an email. “We have coordinated for lower profile, less confrontation likely mission sets to emphasize support roles and minimize public militarization perception.”

Two days later, officers were ordered to change all reference of “enemy” to “criminal elements.”

National Guard Capt. John Quinn called the communications “a generic military planning format utilized in a wide range of military missions.” In an email to CNN, he said: “the term ‘enemy forces’ would be better understood as ‘potential threats.’”

Does the effort to “minimize public militarization perception” represent a PR position or an ethos of protecting and serving American citizens? Does changing the vernacular of internal briefings from “enemy forces” to “criminal elements” change the way our military and police think about the population they’re engaging?

“It’s disturbing when you have what amounts to American soldiers viewing American citizens somehow as the enemy,” Antonio French, a St. Louis City Council person said.

H/T  the Guardian | Photo via The National Guard/Flickr (CC BY 2.0)