"We cannot and will not accept the devaluation of African-American lives."

Four U.S. Congressmen held their hands in the air on Monday in a show of support for protesters incensed by the fatal shooting of 18-year-old African-American Michael Brown by a Missouri police officer.

The gesture, synonymous with the phrase “Hands up, don’t shoot,” has become the symbol of an expanding nationwide movement of communities critical of the state of law enforcement in America. A chief concern of protesters, who’ve taken to shutting down major roadways in U.S. cities like New York, Los Angeles, Oakland, Denver and Seattle, is the asymmetrical use of police force in cases involving black Americans. 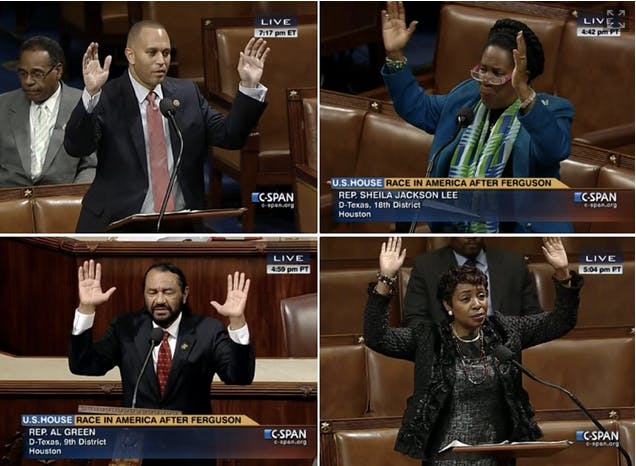 “The killing of Michael Brown and attacks by the Ferguson Police Department on protesters demonstrate an assumption that young women and men who are African American are inherently suspicious—a false assumption with deadly consequences,” Clarke said when she took the floor.

Clarke continued: “We must not allow this false assumption to prevail in our nation, in our society. We cannot and will not accept the devaluation of African-American lives.”

Green applauded five St. Louis Rams players who displayed the gesture in silent protest during a 52-0 win over the Oakland Raiders on Sunday. On Monday, the NFL said it had no intention of adhering to a request from the St. Louis Police Officer’s Association to discipline the players.

The representatives gesture of soldarity drew criticism from MSNBC Morning Joe host Joe Scarborough, who only a day before blasted people using “Michael Brown as the face of black oppression.” He called it a “grave disservice” to police officers.

President Obama unveiled his administration’s $263 million plan for police reforms this week. The proposal would boost training of police forces and provide officers with additional equipment.

Obama’s plan, which would not curtail the transfer of surplus military gear to local police, would use around 29 percent of those funds to subsidize body cameras for police officers nationwide.