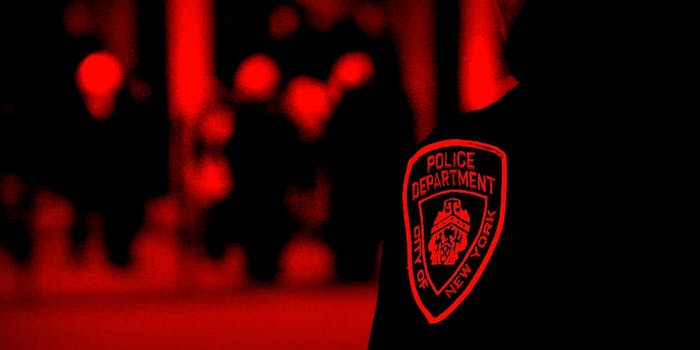 Hope the NYPD has a good dry cleaner.

More than one type of blood spilled as a result of Ferguson-fueled unrest.

Commissioner Bill Bratton of the New York Police Department (NYPD) was splattered with fake blood on Monday evening while attending a protest against police brutality.

Thousands of New Yorkers gathered on Monday night in Manhattan to protest a grand jury’s decision in St. Louis not to indict Darren Wilson, a police officer who in August shot and killed Michael Brown, an unarmed black teenager.

While marching, the NYC protesters chanted “Hands up, don’t shoot,” the now-famous rallying cry at demonstrations in Ferguson, where riots and gunfire simultaneously broke out after the grand jury’s decision was made public.

The identity of the individual who targeted the NYPD Commissioner is unknown, but at some point during the march, Bill Bratton was apparently sprayed with a red liquid—purportedly intended to symbolize blood—prompting fellow officers to quickly remove him from the crowd. According to eyewitness reports via Twitter, the person was taken into custody.

Several photographs and a short Instagram video of the incident was shared by protesters and press over Twitter:

NYPD Commissioner had red paint thrown on him during #Ferguson #michealbrown protest in NYC, Photo from @jeffrae pic.twitter.com/YpmTMLVKAU

Someone just threw blood ( or similar) on NYPD Police Commissioner Bratton ( or someone up there …not sure) right in front of me.. ….total chaos as men in blue and suits react as crowd scatters!! #TimesSquare #FergusonDecision

On Saturday, community leaders and NYC residents gathered outside the 75th police station to demand the arrest of NYPD police officer Peter Liand, who shot and killed an unarmed 28-year-old man last Thursday in a dim stairwell at a housing project in Brooklyn. Medical examiners have ruled the death of Akai Gurley, the victim, a homicide. At a press conference last Friday, Bratton described Gurley as a “total innocent.”

According to Daily News, Councilman Charles Barron shouted at the demonstration: “Killer cops must go” and “Shut this city down.” Police are still investigating the shooting.

Photo by Dave Hosford/Flickr (CC BY 2.0) | Remix by Dell Cameron