Amber Gordon, the 25-year-old founder of the feminist publishing platform Femsplain, is a very busy woman. In between running her new website and being an advisor for BlogHer’s 11th annual conference for women, she just successfully managed to crowdfund $25,000 for her site through Kickstarter. Her campaign reached its goal on Tuesday, with seven days to spare.

“I guess now comes the fun part of making everything,” she told the Daily Dot. 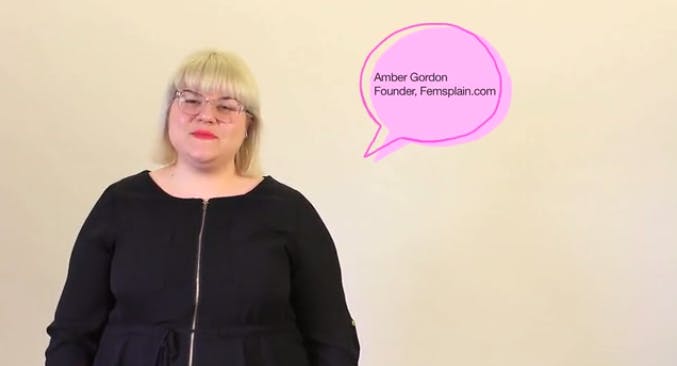 Gordon plans to use the money to redesign the site, pay server costs, and keep paying her contributors $100 per post. But first, she has to fulfill her backer rewards including personalized Vine thank-yous—there are 74 vines to film by next month. Oh yeah, and she’s planning a party for all of her backers and closest friends. (“Good to get everyone together who cares about what we’re doing,” she said.)

Although the site is just four months old and has a small audience, Gordon has quickly become somewhat of a media darling, getting glowing write-ups in the last year from the Huffington Post, Mother Jones, and the New York Observer. The site is structured much like Tavi Gevinson’s Rookie Mag—there’s a different theme every month; Gordon and her band of volunteers publish a few posts per day. A lot of the essays are confessional in tone and there is a growing comment community.

For the young company, Gordon said, the Kickstarter was about more than raising money: “It was a testament that people do care about what we’re doing.”

Gordon said that this campaign is just another starting point and that she plans to start raising money from investors over the next month. “We’re not just going to find someone who just has money,” she said. “We’re looking for someone who believes in our mission and wants to be part of something.” She added that the site has a business model (mostly resting on a series of live events) and that this cash would be used to grow the company, not keep it standing.

Gordon, who also used to run social media for Denny’s, quit her job at Tumblr last month to pursue running Femsplain in a full-time capacity. She is not currently paid by her own company. She told me she feels fortunate to have been “saving money for a very long time” to do this.

For now, she will continue building the site from a community standpoint, which she says is her specialty. Although she recognizes that feminism is enjoying a burst of extreme popularity—these Dove ads, for example—Gordon says the brand of feminism that her site cultivates is inclusive and has permanence.

“It’s not about rich white women … it’s about the women who don’t have support,” she said. “It’s about women of color, women with disabilities. That’s who we want to come to us and feel welcome.”

In this moment of success, Gordon is thankful to those who have supported her. “We cant make it without contributors. It’s good to see people rallying together. We’re creating a revolution.”