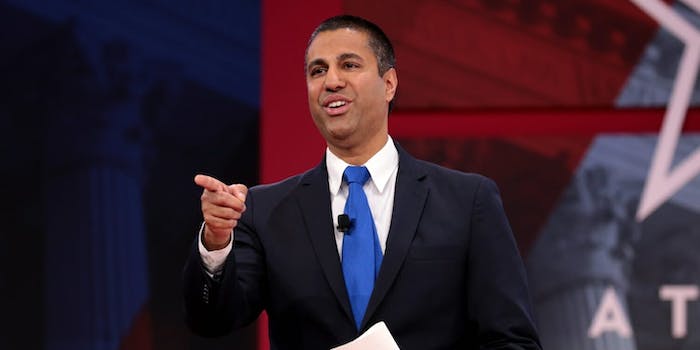 The chairman's proposal for a review won rare praise from his critics.

Federal Communications Commission (FCC) Chairman Ajit Pai has left the proposed merger between Sinclair Broadcast Group and Tribune Media hanging in the balance after saying that he has “serious concerns” about the legality of the planned $3.9 billion deal.

Sinclair, a pro-Trump conservative broadcaster, reportedly planned to sell off certain local stations it would acquire in order to fall within compliance but aimed to exploit major exceptions to the cap and maintain control of the stations.

“The evidence we’ve received suggests that certain station divestitures that have been proposed to the FCC would allow Sinclair to control those stations in practice, even if not in name, in violation of the law,” Pai wrote in a statement released Monday.

He then referred the Sinclair-Tribune deal for review by an administrative hearing judge. According to Reuters, the proposed review order states that “Sinclair’s actions here potentially involve deception.”

Pai’s sudden interjection in the deal comes as a surprise to critics, who have long accused him of preferentially supporting Sinclair. The exception to the broadcast limit that Sinclair planned to utilize was actually introduced under Pai in April last year. It was for this reason that the FCC’s internal watchdog initiated an investigation in February as to whether Pai had improperly coordinated with the company to facilitate changing the rules.

Critics of the deal, including smaller cable companies and consumer groups, praised Pai’s proposal for a review.

“Free Press hasn’t seen eye to eye with Chairman Pai since he took over the FCC. But today’s announcement is unequivocally the right thing to do under the law. This is a giant win for the public and a huge setback for Sinclair’s mega-merger plans,” Free Press Policy Director Matt Wood said.

Jessica Rosenworcel, the FCC’s only Democrat commissioner, also responded in a statement.

“As I have noted before, too many of this agency’s media policies have been custom built to support the business plans of Sinclair Broadcasting,” Rosenworcel said. “With this hearing designation order, the agency will finally take a hard look at its proposed merger with Tribune. This is overdue and favoritism like this needs to end.”