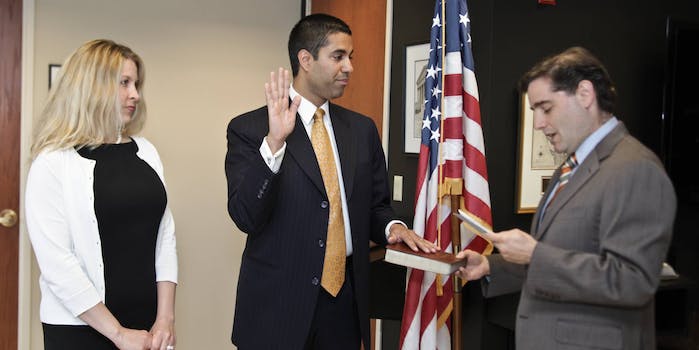 Internet freedom hangs in the balance.

So-called “zero-rated” streaming services are not just unethical but in straight violation of the Federal Communications Commission net neutrality rules, according to the completed FCC investigation report on the practice published on Wednesday.

Net neutrality is the principle that internet service providers must treat all data on their networks equally. FCC rules adopted in early 2015 require ISPs adhere to this principle.

The report took aim at, among other services, AT&T’s zero-rated DirecTV Now. The service offers a bundle of over 100 channels to customers as part of their contract and doesn’t count streaming those channels against a customer’s monthly allocated data count.

“[Although] designed to enable third party edge providers to deliver streaming edge content on a zero-rated basis to AT&T’s mobile broadband subscribers,” the FCC report reads, “…we have serious concerns that AT&T Mobility’s Sponsored Data program presents competitive problems and, to date, nothing in AT&T responses to the Bureau’s requests for information has addressed our concerns.”

In drawing this conclusion, the commission underlines the criticism and concern of internet activists and net neutrality advocates across the country, who believe that zero-rated schemes discriminate against smaller content providers because they often give way to a practice known as “sponsored content” and thus narrow the competitive playing field.

Most of these kinds of services appear to save customers money and claim to offer more choice, but when an internet service provider charges third-party content providers or channels that want to feature on the zero-rated service, ISPs then have control over which content they want customers to see.

Before the new DirectTV Now service went live, AT&T insisted that it adhered to net neutrality legislation. At the time, FCC staffers were concerned that it didn’t and wanted AT&T to hold its launch while the service was investigated. Regardless, the company pushed ahead and launched in late November, notably just weeks after Donald Trump’s electoral victory. The new report is a result of that investigation, but it seems too little to be anything other than futile.

The impending political wind change will see the end of Democrat Tom Wheeler’s term as chairman and the appointment of a Trump-era Republican, ready to roll back on neutrality regulation on behalf of the anti-regulation Trump administration. The two most likely candidates are the Republican commissioners that currently sit on the FCC, Ajit Pai and Michael O’Rielly—both of whom have been busy at work ahead of the inauguration.

In a letter that will alarm net neutrality activists, the pair wrote to major ISP and telecommunications lobbying organizations, which opposed net neutrality rules, in December to reassure them that they “dissented from the Commission’s February 2015 Net Neutrality decision, including the Order’s imposition of unnecessary and unjustified burdens on providers … [and] will seek to revisit those particular requirements, and the Title II Net Neutrality proceeding more broadly, as soon as possible.”

Further to that, in a speech to the Free State Foundation, Pai enthusiastically detailed the prospect of eradicating internet regulation: “I’m optimistic that last month’s election will prove to be an inflection point—and that during the Trump Administration, we will shift from playing defense at the FCC to going on offense. … [We] need to remove outdated and unnecessary regulations. … We need to fire up the weed whacker and remove those rules that are holding back investment, innovation, and job creation.”

So, it now seems unlikely that AT&T will face any action resulting from the report’s findings and may soon find themselves unburdened by the law and FCC.

In a statement on Wednesday, and with perhaps one eye on the potential promotion, Pai completely dismissed the investigation and emphatically slammed the findings: “It is disappointing that the FCC’s current leadership has yet again chosen to spend its last days in office the same way it spent the last few years—cutting corners on process, keeping fellow Commissioners in the dark, and pursuing partisan, political agendas that only harm investment and innovation … casting doubt on the legality of free data offering.”

“Fortunately,” he added. “I am confident that this latest regulatory spasm will not have any impact on the Commission’s policy making or enforcement activities following next week’s inauguration.”