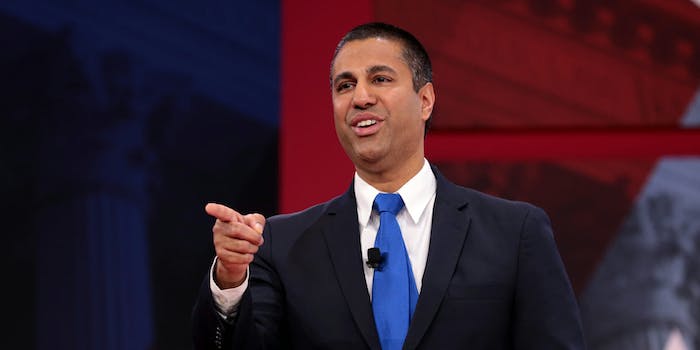 The fake comments have been criticized for months.

The Federal Communications Commission (FCC) said it will address its online public comment system in the wake of millions of fake comments being left ahead of its vote last year to dismantle net neutrality protections.

The comment system fix was mentioned in a letter from FCC Chairman Ajit Pai to Sen. Pat Toomey (R-Pa.) and Sen. Jeff Merkley (D-Ore.), the Wall Street Journal reports, who asked the agency to “identify and address fraudulent behavior” in its comments system in late May.

In that letter, the two senators said their names were among the millions that were left fraudulently ahead of the FCC’s net neutrality vote. The fake names have stirred a torrent of criticism directed at the FCC, and they are at the center of an investigation by the New York Attorney General.

Both the Senate and the House of Representatives asked the FCC to investigate the fake comments before its controversial vote to dismantle net neutrality rules. In response to the Senate’s request, the FCC said lawmakers were “desperate” to try and delay the vote.

It now appears the FCC is signing a different tune.

“It is troubling that some bad actors submitted comments using false names,” Pai wrote in a letter to Toomey and Merkley. “Indeed, like you, comments were submitted in my name and my wife’s name that reflect viewpoints we do not hold.”

Pai said he has asked Congress for permission to move around money in order to pay for a fix to its public comments system, according to the newspaper.

Some of the changes could include a captcha system or allowing someone who has spotted a fake comment being left to send in a letter to the FCC that would also be put in the public record, the Journal reports.

This wouldn’t be the first time the FCC’s comments system has been overhauled. As Gizmodo points out, the agency spent nearly $3 million between 2013 and 2015 to modernize the public comments system.