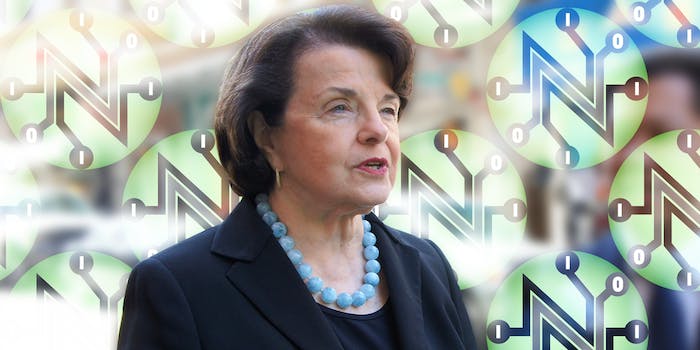 The FCC says she can rest easy.

The Democratic senator who has led the charge for blocking online terrorist content is worried about net neutrality.

“It has recently come to my attention that some broadband providers are suggesting, including through discussions with my staff on the Senate Select Committee on Intelligence, that the FCC order may prevent them from blocking the posting of information that inspires and aids terrorist activity,” Feinstein wrote in her letter, which was sent in May and released on Thursday.

She continued: “I write today to urge the Commission to clarify that the Open Internet order does not protect content like [the al-Qaeda publication] Inspire magazine, which seeks to encourage and assist individuals in carrying out acts of terrorism.”

The Federal Communications Commission’s net-neutrality rules, which went into effect in June, forbid Internet service providers from blocking legal content or otherwise discriminating against websites or online services, like Netflix.

Feinstein has crusaded against the proliferation of online terrorist content for years. She sponsored a 1997 Senate bill that criminalized the distribution of bomb-making instructions when the distributor knew they would be used for “an activity that constitutes a Federal criminal offense or a State or local criminal offense affecting interstate commerce.”

More recently, Feinstein suggested that Internet companies should censor the Anarchist Cookbook, a famous bomb-making manual, and other similar guides. And she inserted a provision into the bill funding the U.S. intelligence community for the 2016 fiscal year that would require tech companies to report terrorist activity to the government.

Wheeler has already assured the senator, in response to a prior letter, that the net-neutrality rules preserved ISP’s right to block extremist material. That exemption, carried over from the 2010 order, reads as follows:

Nothing in this part supersedes any obligation or authorization a provider of broadband Internet access service may have to address the needs of emergency communications or law enforcement, public safety, or national security authorities, consistent with or as permitted by applicable law, or limits the provider’s ability to do so.

Photo via David Lee/Flickr (CC BY 2.0) | Remix by Jason Reed