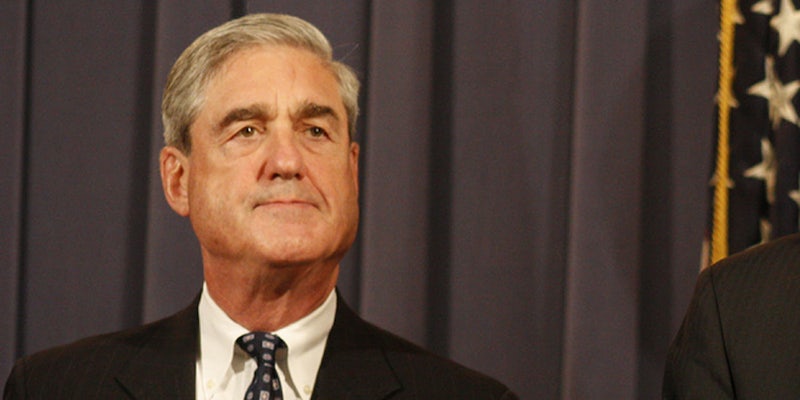 The whole situation is convoluted.

The FBI is reportedly investigating a possible hoax where “false claims” of sexual misconduct would be made against Special Counsel Robert Mueller, according to reports.

The story is convoluted. An email was sent out to several reporters in recent weeks, according to numerous reports, where a woman claimed that she was offered money in exchange for making “accusations of sexual misconduct and workplace harassment against Robert Mueller.”

The Atlantic reports that Mueller’s team referred the possible scheme to the FBI after learning about the alleged scheme from journalists.

The Special Counsel’s office told CNBC that the FBI is now investigating the situation.

“When we learned last week of allegations that women were offered money to make false claims about the Special Counsel, we immediately referred the matter to the FBI for investigation,” Pete Carr, a spokesperson for the special counsel’s office told the news outlet.

The Hill Reporter, a political website where Ed Krassenstein and Brian Krassenstein write, posted on Tuesday about receiving the message from the woman who said a man named Jack Burkman reached out to her and offered to pay off her credit card debt and give her $20,000 if she made accusations against Mueller.

Burkman, a conservative radio host, denied knowing the “woman” who alerted the journalists, according to the Atlantic. He told Rolling Stone “there’s no truth to the claim we paid anyone.”

On Tuesday Burkman tweeted that he would reveal “the first of Special Counsel Robert Mueller’s sex assault victims” at an event on Thursday.

After the news of the FBI’s investigation broke, Burkman reiterated the claims of paying a woman were false.

“The allegations of paying a woman are false,” he wrote. “The left is trying to defend Mueller against sex assault allegations so they attack me in desperation. The establishment media knows that Mueller may go down over this–they want to deflect attention.”

However, the allegations quickly made their way to conservative news outlets. The Gateway Pundit published redacted documents of an investigation that included the phrase “international private intelligence,” which some people online pointed out, matched phrases used by Surefire Intelligence–a firm several news outlets have linked to Jacob Wohl, a right-wing Twitter personality.

Sure looks like this weird "private intel agency" is the one that made the dodgy Mueller accusation. They claim to have been founded by ex-Mossad lol pic.twitter.com/jzjvLwhw4t

Wohl has denied involvement in the situation in several Twitter posts, but SureFire has been revealed to be a fake company registered to Wohl.

“The MSM has launched a coordinated smear campaign against me, claiming that I offered money to a woman to make accusations against Mueller? Their claims are BASELESS! Who is this ‘woman’?” he wrote. “All of a sudden, when @Jack_Burkman reveals that there are credible accusations against Robert Mueller, the media spins up a narrative that “women” were offered payment. Who are these women that say they were offered payment? It looks like they DON’T EVEN EXIST.”

A second woman came forward, according to the Atlantic, who said she was contacted by someone using a Surefire Intelligence email address. The email offered to “compensate” her for “whatever rate you see fit.” The woman, Jennifer Taub, told the news outlet she forwarded the email to the Special Counsel’s office.