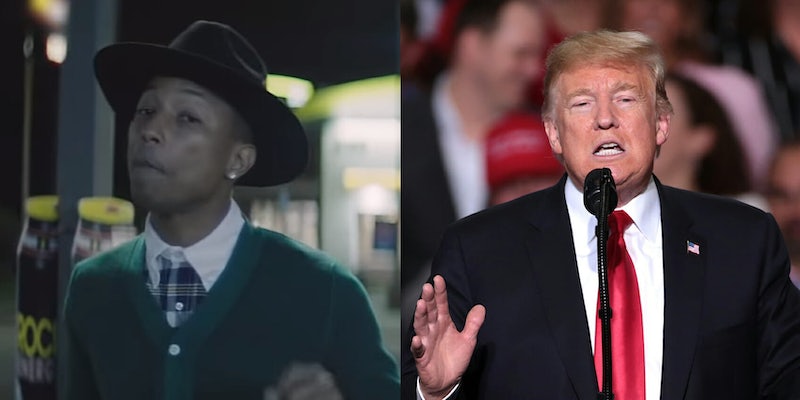 Pharrell is upset Trump played ‘Happy’ at a rally after Pittsburgh

A cease-and-desist letter was sent to the president, according to a report.

Pharrell Williams has reportedly sent a cease-and-desist letter to President Donald Trump after he used the singer’s hit song “Happy” at a rally just hours after the synagogue shooting in Pittsburgh over the weekend.

A copy of the letter sent to the president was obtained by the Hollywood Reporter.

The letter alleges that Trump used Williams song “Happy” at a rally in Indiana on Saturday after 11 people were killed at Tree of Life Congregation Synagogue in Pittsburgh, Pennsylvania. The suspected shooter, Robert Bowers, shouted anti-Semitic epithets.

“We write you on behalf of our client, Pharrell Williams, composer and performer of the hit song ‘Happy,'” the letter reads. “On the day of the mass murder of 11 human beings at the hands of a deranged ‘nationalist,’ you played his son ‘Happy’ to a crowd at a political event in Indiana. There is nothing ‘happy’ about the tragedy inflicted upon our country on Saturday and no permission was granted for your use of this song for this purpose.”

WOWZA. Check out this cease and desist sent by Pharrell Williams to Donald Trump for using “Happy” on “the day of the mass murder of 11 human beings,” as the letter puts it. pic.twitter.com/Mst83Vp0kO

The letter also says Williams will not allow Trump to use “broadcast or disseminate” any of his music.

Other musicians, such as Aerosmith’s Steven Tyler, have also expressed displeasure with the president using their music at his events.

You can read all of the Hollywood Reporter‘s report here.