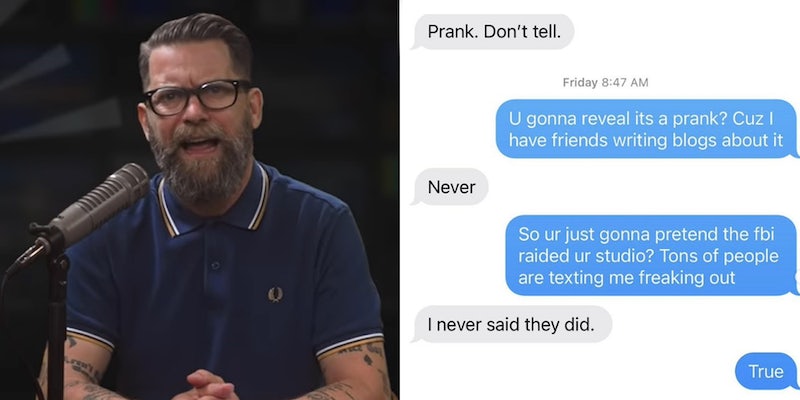 A far-right comedian says McInnes staged the arrest as an 'attention grift.'

The alleged arrest last week of Proud Boys founder Gavin McInnes appears to have been nothing more than a staged prank.

McInnes was seen walking off the screen during a live broadcast on Thursday after law enforcement “allegedly” took him into custody for questioning.

Associates of McInnes, such as comedian Josh Denny, claimed later that day that the far-right figure was “rotting away in jail” for daring to “question authority.”

“Just got off the phone with our people. It’s not a bit,” Denny wrote. “Gavin was AGAINST going to Jan 6. He was AGAINST Charlottesville (and told Proud Boys they were out of the club if they went) but he’s rotting away in jail because he dared to question authority.”

But questions over the legitimacy of the alleged arrest quickly arose. Numerous journalists who looked into the matter noticed that no evidence existed of any arrest.

Police in New York, where McInnes lives and works, denied taking him into custody. No announcements were made by federal law enforcement either. Court records also failed to show that McInnes had been charged.

On Monday, however, a rival of McInnes said that the entire incident had been staged. Owen Benjamin, a far-right comedian known for conspiracy theories and Holocaust denial, released what he claimed were screenshots of text messages from McInnes admitting that the so-called raid was merely a prank.

In a lengthy statement, Benjamin referred to the alleged prank as nothing more than an “attention grift.”

Denny, the associate of McInnes, also appeared to insinuate that the purported arrest had been fabricated.

In a Twitter thread on Monday, Denny, without mentioning Benjamin by name, bemoaned “any comedian” that “puts pride and principle over creativity, innovation, and humor.”

“And any ‘comedian’ that tanks another guy’s bit before it’s finished is just a jealous, bitter cunt,” he wrote.

In a later tweet, Denny sarcastically told his followers to address all questions regarding the “bit” to Benjamin, who he sarcastically claimed had “taken it upon himself to become Gavin’s publicist.”

Despite the apparent revelation, McInnes has still declined to publicly comment on the matter.

With no records of an arrest and the new comments from Denny and Benjamin, all signs point toward a poorly-executed prank on behalf of McInnes.