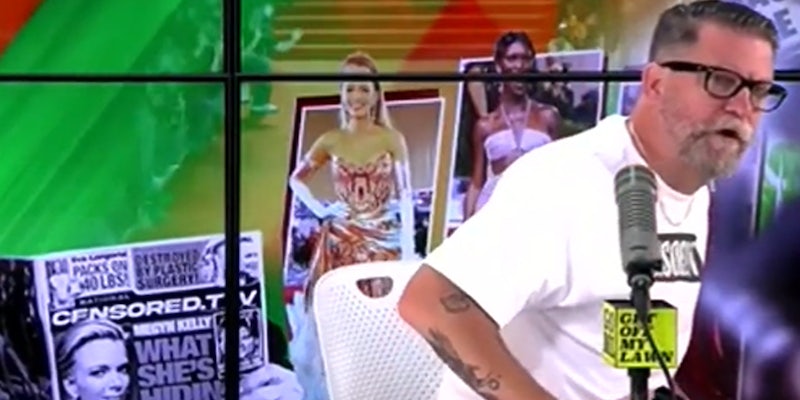 Despite the claim, no evidence has been presented.

Speculation is swirling online after Proud Boys founder Gavin McInnes was seemingly interrupted by law enforcement during a live broadcast on Thursday.

Footage uploaded to Twitter shows McInnes talking to someone off-screen before eventually walking out of frame in the middle of his talk show.

“We’re shooting a show,” McInnes says. “Can we do this another time?”

After several moments of silence, McInnes is heard attempting to set up a meeting with legal counsel and the individuals off-screen.

“Alright, I’m happy to do that,” he says. “I’ll get a lawyer and we will sit down and have a conversation. We’ll schedule a meeting and we’ll sit down with my lawyer.”

Before disappearing off-camera entirely, McInnes tells the individuals that he “did not let them in” to his building.

News of the incident quickly spread online, with rumors claiming that McInnes had been arrested or that the entire fiasco was nothing more than a prank.

More footage surfaced on Twitter shortly after from a Tuesday episode of McInnes’ talk show in which he claimed that “unmarked police car” had been sitting outside his home.

Josh Denny, a comedian who works alongside McInnes, claimed in a tweet on Thursday that the far-right commentator had in fact been arrested.

“Just got off the phone with our people. It’s not a bit,” Denny wrote. “Gavin was AGAINST going to Jan 6. He was AGAINST Charlottesville (and told Proud Boys they were out of the club if they went) but he’s rotting away in jail because he dared to question authority.”

Yet despite the claim, no law enforcement entities have thus far announced any such arrest.

The situation became even more bizarre on Friday after David Gilbert, a Vice News journalist specializing in the far-right, claimed a source told him that McInnes hadn’t been arrested.

“A source connected to the Proud Boys tells me that Gavin McInnes was not arrested last night, and he has been chatting in a number of closed PB Telegram groups in recent hours,” Gilbert wrote. “When I asked if it was all a prank, the source could not say.”

USA Today journalist Will Carless also noted that police in New York where McInnes lives and works denied partaking in any such arrest. No online announcements or records indicate at this time that McInnes is in custody either.

“Trying to confirm what’s up with Gavin Mcinnes abruptly leaving his show last night in the middle of his livestream,” Carless wrote. “A colleague of his tweeted McInnes was ‘hauled off by the feds,’ but no charges filed on PACER or press releases from DOJ/FBI, so reserving judgment.”

While many are treating the footage as definitive proof that McInnes was arrested, no actual confirmation has been made thus far.