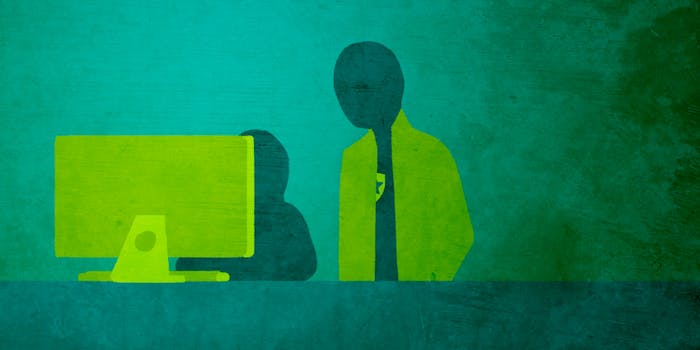 The FBI has dramatically increased its use of sting operations, which was once only used as a last resort.

With the specter of an Islamic State attack always looming, it may be comforting to learn that the FBI has dramatically increased its use of sting operations to thwart terrorism. But the bureau’s undercover operatives are anything but bystanders; they’ve provided suspects with weapons, helped scope out their targets, and sculpted the very plots that they’re tasked with preventing.

One must ask: Is the FBI creating terrorists?

Since the FBI began investigating Americans possibly tied to the Islamic State nearly two years ago, the U.S. has brought charges against nearly 90 people. Sting operations, which drop an informant in the middle of a purported plot, were once only used as a last resort. In fact, Federal Bureau of Investigation guidelines, which were last updated in 2011, require the “least intrusive” investigative option. But a New York Times analysis published on Tuesday found that undercover stings have been used in around two thirds of Islamic State-linked prosecutions.

“Law enforcement is given great deference and often employs dubious tactics, including trickery and deceit, in pursuing and furthering investigations.”

FBI officials told the Times that the anonymity social media gives extremists online has made stings necessary for gathering evidence. “When the bad guys turn to encrypted areas, we’re dark,” Michael Steinbach, who leads the bureau’s national security branch, told the Times. “The only way to gain a better understanding of what we’re up against may be through an undercover.”

The process begins with agents scouring social media sites like Facebook and Twitter looking for people championing the Islamic State or violent extremism. When the FBI identifies a person whose messaging fits the bill, an undercover agent contacts them. The hope is that the agent will gain the suspect’s trust, leading them to reveal their true identity. But in many cases, undercover operatives are used in cases that do not involve suspects cloaked in the warm blanket of internet anonymity.

In February, for instance, a Washington state army deserter was charged with five counts of unlawful firearms possession as a result of an FBI sting operation. Witnesses tipped off the bureau after Daniel Seth Franey, 33, also known as Abu Dawuud, openly voiced his support for ISIS and claimed that he wanted to go abroad to “join the fight.” That’s when the FBI sent an undercover agent to meet with Franey and pose as an underground small arms dealer.

It was during their first meeting, according to court documents, that Franey allegedly told the agent that ISIS was comprised of “the best people on Earth” and that Osama bin Laden was “a beautiful man,” as well as “a holy warrior” and “a diamond.” He allegedly added during a subsequent meeting that he considered himself to be an ISIS soldier and said that various U.S. officials should be killed, ranging from politicians to army units preparing to ship out.

Throughout the investigation, the undercover agent took Franey on rides to California to deliver guns. On these trips, according to the charging papers, the agent paid him a few hundred dollars to serve as “lookout.” Franey also handled multiple guns in his role, despite a court order barring him from doing so. (His former partner took out a domestic violence protective order against him in 2014.) Many of the customers to whom he sold firearms were also FBI agents. Franey has yet to face trial.

“The FBI regularly targets people who have no connection to terrorism,” Arjun Singh Sethi, a law professor at Georgetown and Vanderbilt, and an expert in counterterrorism and law enforcement abuse, tells the Daily Dot by email. “The evidence shows that the FBI is particularly keen on targeting those who are acutely vulnerable, including people with mental or intellectual disabilities and the indigent, with overreaching tactics.”

Steinbach would disagree with Sethi’s characterization. “We’re not going to wait for the person to mobilize on his own timeline,” Steinbach told the Times, adding that the bureau can’t “just sit and wait knowing the individual is actively plotting.”

In another undercover sting, the FBI claims to have foiled a mass shooting at a Wisconsin Masonic temple. Samy Mohamed Hamzeh, 23, first made a blip on the FBI’s radar last September when agents say they were alerted of his plan to attack Israeli soldiers. When that plan did not work out due to a series of “family, financial, and logistical reasons,” according to an FBI affidavit, he refocused his efforts on a domestic plot. That’s where the FBI’s informants come in.

After getting to know Hamzeh, the two informants accompanied him on a tour of the temple. Those informants both scoped out the location and were taken into account in the planning of the attack. “One of us will stay at the door entrance and lock the door down,” Hamzeh told the informants, according to the U.S. Attorney’s Office. “Two will get to the lift up, they will enter the room and spray everyone in the room. The one who is standing downstairs will spray anyone he finds … we will eliminate everyone.”

Since one of the informants already had a machine gun, Hamzeh decided to purchase two additional weapons and three silencers to carry out the plot. Since he was fired from his job as a gym trainer weeks prior, it is unclear how he was able to afford the machinery. Hamzeh was arrested after purchasing the weapons from undercover FBI agents and charged with unlawfully possessing a machine gun, as well as receiving and possessing firearms not registered to him. He pleaded not guilty in February and awaits trial.

“Many of these individuals would not commit a crime without the encouragement, assistance, or financial backing of law enforcement,” says Sethi. “The FBI claims unfettered authority to conduct investigations, including the use of confidential informants, even when there is no evidence of wrongdoing.

“This leads to dangerous overreach,” he continued, “and has chilled constitutional rights in Muslim American communities. The use of informants should be subject to meaningful oversight and should only be used if law enforcement has reasonable suspicion of wrongdoing.”

In an investigation concluded last month, a south Florida man was charged with attempting to use “a weapon of mass destruction” to blow up a synagogue. It is unclear how the FBI learned of 40-year-old James Medina’s plan, but it inspired yet another sting operation. Like in the above cases, it was the FBI that provided Medina with his weaponry; an informant introduced him to an acquaintance whom the informant said was an explosives expert. That expert, also an undercover FBI agent, gave Medina the inactive bomb, which he was ultimately arrested for possessing.

An added layer of contention lies in the fact that it was the informant, and not Medina, who first suggested that the attack be linked to the Islamic State. The informant, “indicated that they should leave a ‘clue’ as to who was responsible and Medina concurred,” according to the FBI affidavit. “You can, you can do all that,” Medina allegedly responded, according to the affidavit. “Yeah, we can print up or something and make it look like it’s ISIS here in America. Just like that.”

FBI officials told the New York Times that they are careful to avoid entrapping suspects, especially since defense lawyers are quick to make the accusation. That’s why, the officials continued, they gauge the suspects’ commitment by giving them an “out.” With the limited information publicly provided about these clandestine operations, it is unclear what an out entails, especially in specific cases. Though it has been considered, no judge has thrown out an Islamic State-linked case on the grounds of entrapment.

“Law enforcement is given great deference and often employs dubious tactics, including trickery and deceit, in pursuing and furthering investigations,” says Sethi. “It’s thus disappointing but not surprising that courts aren’t receptive to the entrapment defense.”