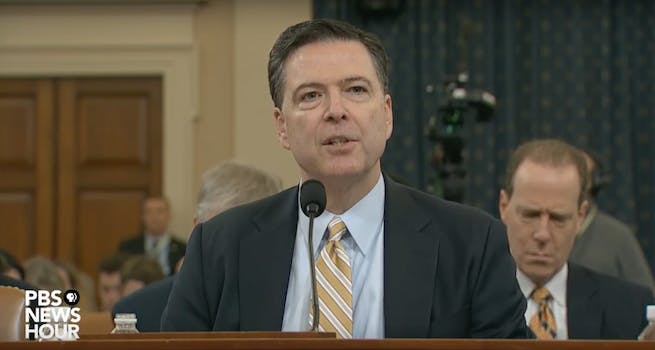 FBI Director James Comey on Monday confirmed an “open, ongoing investigation” into “the Russian government’s attempts to interfere in the 2016 election,” including potential collusion between President Donald Trump‘s campaign and the Kremlin.

Comey testified alongside NSA Director Adm. Mike Rogers before the House Intelligence Committee on Monday, the first day of hearings aimed at exploring the extent of Russian interference in the 2016 presidential election. As expected, alleged Russian connections to the Trump campaign and Trump’s unsubstantiated claims that former President Barack Obama wiretapped Trump Tower prior to the election were hot points of inquiry.

Comey explained that, while he was under no obligation to publicly announce the investigation, which began in “late July,” it was now within the public interest to do so. He further detailed that agents were subsequently exploring any alleged Russian links to the Trump campaign.

“I have been authorized by the [Department of Justice] to confirm that the FBI… is investigating the Russian government’s attempts to interfere in the 2016 election,” Comey told the committee. “That includes any links between the Trump campaign. … This will also include an assessment of whether any crimes were committed.”

Since the U.S. intelligence community confirmed that Russia had orchestrated cyberattacks with intent to tamper with the 2016 presidential election, a number of high-profile members of Trump’s team have come under fire following revelations of their private meetings with Russian ambassador to the U.S., Sergey Kislyak.

Among them were former National Security Adviser Michael Flynn, who subsequently was forced to resign, and Attorney General Jeff Sessions, who then recused himself from participation in any Justice Department investigations into Russian election interference. Both men had failed to disclose that they had met with Russian officials.

In the weekend following the Sessions revelations, as the attorney general faced mounting pressure to step down, Trump lashed out via Twitter at former President Barack Obama with the unsubstantiated wiretapping claims.

“We know there was not a physical wiretap at Trump Tower. However, it is possible that other surveillance technology was used against President Trump and his associates,” Nunes commented.

Despite repeated assertions from Comey, Rogers, and multiple lawmakers, White House Press Secretary Sean Spicer asserted last week that the president was “extremely confident” that the Justice Department will find evidence to back up his allegations.