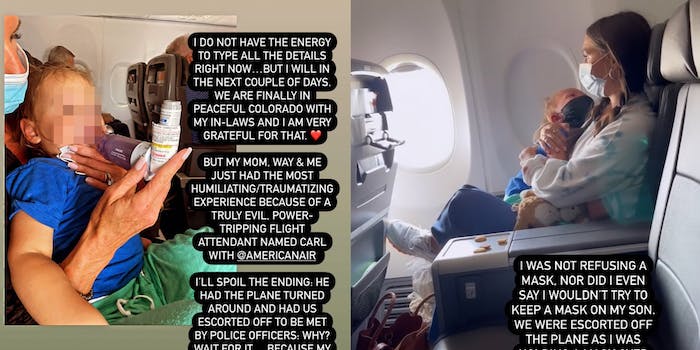 'He had the plane turned around and had us escorted off to be met by police officers.'

A family was escorted off of an American Airlines flight this week after their asthmatic toddler struggled to keep a mask on.

In footage uploaded and shared across social media on Monday, Instagram user Amanda Pendarvis claimed that her family was met by police after their flight to Colorado was turned around following an altercation with a flight attendant.

“He had the plane turned around and had us escorted off to be met by police officers: Why? Wait for it… because my 2 year old was not properly wearing a mask,” Pendarvis wrote on an Instagram story.

Pendarvis, who claims she was referred to by the flight attendant as a “non-compliant traveler,” went on to state that she had attempted to show the flight attendant a negative COVID-19 test for her son to no avail. The mother also said her son, who can be seen crying and pulling his mask down in the footage, had never worn a face covering before.

“I was not refusing a mask. Nor did I even say I wouldn’t try to keep a mask on my son,” Pendarvis said. “We were escorted off the plane as I was holding a mask over his little face. I genuinely don’t have words.”

Pendarvis, who did not respond to inquires from the Daily Dot, further claimed that the majority of passengers appeared to side with her over the airline.

In response to inquires from the Daily Dot on the allegations, American Airlines appeared to confirm Pendarvis’ account.

“On Sept. 13, American Airlines flight 1284 returned to the gate prior to departure from Dallas-Fort Worth (DFW) to deplane a party on board,” spokesperson Andrew W. Trull said. “Initial reports indicate the party refused to comply with crew member instructions to remain seated and wear a face mask securely over their nose and mouth. After agreeing to adhere to federal face-covering requirements, all individuals were rebooked for travel on the next flight to Colorado Springs (COS).”

The airline also cited directives from the CDC and TSA that require all individuals over the age of two to wear face coverings on flights. Some exemptions to the mask requirement can be made so long as a passenger makes a request at least 72 hours prior to departure and can provide a negative COVID test and documentation from a licensed health care professional.