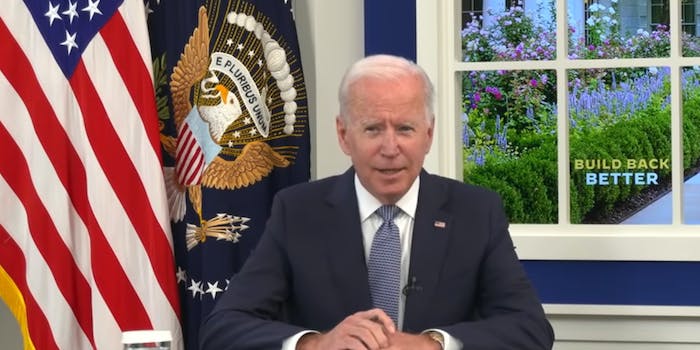 He's just in an auditorium that is used often.

Conservatives online are continuing to push a conspiracy theory that President Joe Biden was in a “fake Oval Office” as they tried to spread accusations about his fitness for office. But in reality, he was just using a set in an auditorium across the street from the White House.

The “fake Oval Office” conspiracy tends to insinuate that Biden isn’t mentally fit to be president, or is not actually the president. It crops up frequently, most recently when Biden received his COVID-19 booster shot and yesterday when he held a meeting with business CEOs about the debt limit.

Fox News published a story about people mocking Biden for using the set, and so many people online tweeted about it that “Oval Office” was trending on Twitter on Thursday morning.

But the answer is much more simple: Biden was holding the meeting in the South Court Auditorium in the Eisenhower Executive Office Building.

Video from the White House’s YouTube channel shows the full stage, with people sitting at desks that are spread out across it. A large video screen is on the stage that says “Roundtable with business leaders” and “Build Back Better.”

The Eisenhower building, which is across the street from the Oval Office, houses offices for the White House staff, including the office of the Vice President, the Office of Management and Budget, and the National Security Council.

As the Washington Examiner notes, the South Court Auditorium has been used for “high-profile events” since 2012.

In December, former President Donald Trump held an event for “Operation Warp Speed” for the COVID vaccine in the auditorium.

More recently, Vice President Kamala Harris held an event in the auditorium in May where she spoke about the importance of broadband and closing the digital divide while pushing the administration’s infrastructure package.

Last week, when Biden received his COVID booster shot, the event was also held at the South Court Auditorium. As PolitiFact reported, the use of the set sparked a number of conspiracies, including that the administration “created” the set for the event.

Biden got his shot on the set in at the auditorium, which had white columns and large windows. PolitiFact noted that the same backdrop was used for an event five days before Biden got the booster shot.

Harris used a similar backdrop with white columns and large windows on Sept. 22 while speaking during a virtual United Nations summit.

So while the set may look vaguely like the White House, it’s nothing more than an oft-used auditorium across the street.