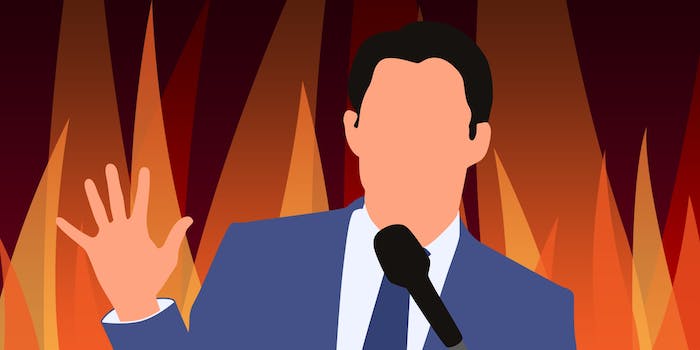 Election season is the dumbest season.

The American political campaign system is insane. Or, at best, thinking about how the sausage is made could quite easily make you crazy.

Gravity pulls everything towards the Earth, all living things must eventually die, and thinking too hard about how we select the men and women tasked with running arguably the single most important organization in world history is terrible for your mental health.

As a way to fittingly pay tribute to that insanity, the Daily Dot enlisted the help of New York-based video artist Matt Kliegman to create a series of campaign commercials that are as forcefully bizarre as the entire process of running for office itself.

See, campaigns regularly release footage onto YouTube that anyone can use; they aren’t allowed to restrict the footage only to people they want because that would be against the law.

We realized this was an opportunity to grab footage from three candidates and use if for our ends. We made a trio of ads that are just as ridiculous as the process itself. The Daily Show with Jon Stewart did something similar when they took footage of Senate Minority Leader Mitch McConnell and set it to a litany of different songs to hilarious effect.

However, we decided to see what would happen if we used the footage for its (almost) intended purpose and made campaign spots of our own.

The first ad takes footage of Democratic Iowa Senate Candidate Bruce Braley and turns it into an ode to GMILFs:

The second ad shows why Cory Gardner may beat Sen. Mark Udall (D-Co.) in a contest of ninjutsu and also in the race for a Colorado Senate seat:

And the third ad, well, let’s just say if you’re the one who took Georgia Republican Karen Handel’s pen, you best give it back:

But wait, that’s some method to this madness—if you can say a system full of inane loopholes has a method.

Campaign season has been monstrously odd for over a generation—at least since Newt Gingrich’s late-90’s Republican Revolution discovered a winning strategy in nationalizing every race in the country, such that the dumb things said by a state senate candidate in Iowa are fodder for school board elections in Oregon.

In the wake of the Supreme Court’s 2010 Citizens United decision, however, the back end of how political campaigns are paid for got a whole lot stranger. In Citizens United, the court decided that it was perfectly legal for “people” (read: giant corporations or self-interested billionaires) to spend unlimited money on a given political race as long as that spending wasn’t being coordinated with a candidate’s official campaign.

Depending on how much you think the justices understood the implications of their ruling, the decision was some combination of ruthlessly cynical and embarrassingly naïve. Either way, by an overwhelming margin, the American people think the decision was completely wrong.

The reason for this opposition is relatively simple. The Supreme Court has essentially allowed individuals and organizations with deep pockets to effectively buy elections. In the 2012 election cycle alone, the billionaire Koch brothers spent more than $400 million of their own cash trying to spin all of American government in their favor. (They’re expected to spend around $290 million this election cycle.)

While the amount of support that can be given to an individual campaign still has its limits, the Supreme Court’s loophole of allowing unlimited expenditures from independent groups effectively rendered those limits moot.

Take, for example, that Restore Our Future super PAC tasked with assisting former Massachusetts Governor Mitt Romney in his Sisyphean task of becoming the first business robot in the Oval Office. That super PAC was technically independent, but it was run by a cadre of staffers who previously worked for Romney.

As USA Today noted, when Romney was locked in a primary battle against Gingrich, TV ads run by Restore or Future were eerily similar to those run, at nearly the same time, by Romney’s official campaign. Both ads took Gingrich to task for trying to wrap himself in Ronald Reagan’s sepia-toned legacy even though Reagan himself was’s that big of a fan of the former House Speaker.

The two arms of the Romeny campaign, one officially official and the other officially unofficially, were prohibited by law from talking to each other, yet somehow managed to work together in lockstep. Weird, right?

It turns out organizations involved in getting a given candidate elected don’t need to talk to each other directly to row in the same direction—all a campaign has to do is drop a trail of breadcrumbs obvious enough for anyone at a super PAC to latch find.

Possibly the most egregious example is the aforementioned b-roll footage that campaigns have been dropping into YouTube, which is where we grabbed the clips for the videos above.

Let’s say you’re a campaign staffer and you’d like a super PAC to run an ad supporting your candidate that features them shaking hands with soldiers, kissing babies, and voluntarily touching old people without being visibly grossed out. You have the footage, but you can’t just email it over to the super PAC because that would be illegal coordination. Instead, you just quietly drop it into your campaign’s YouTube account and hope the right people notice.

The whole system couldn’t be dumber.