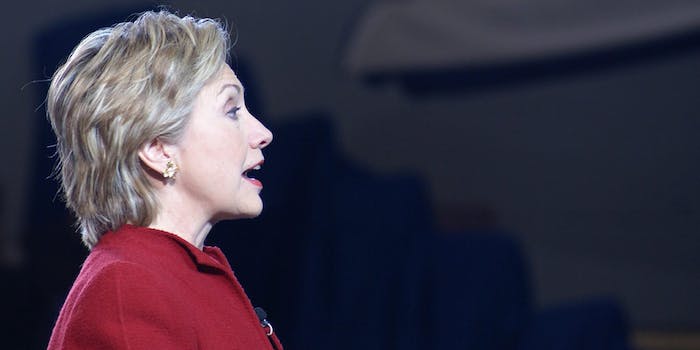 Is what she says true or false?

Six months after the New York Times sparked the scandal about her use of personal email as secretary of state, the 2016 Democratic presidential candidate apologized in an email to her supporters.

“Yes, I should have used two email addresses, one for personal matters and one for my work at the State Department,” Clinton wrote. “Not doing so was a mistake. I’m sorry about it, and I take full responsibility.”

Clinton followed up with four key assertions about the scandal:

1) “Hillary takes responsibility for her decision to use a personal account, and the challenges it has created.”

Clinton’s decision to apologize for the use of a private email system for her work as secretary of state is a significant turnaround from earlier this year, when her communications director, Jennifer Palmieri, called the scandal “nonsense.”

2) “Her use of a private email account was allowed under State Department rules.”

This is one of the most important arguments Clinton has been making since the early days of the scandal. The truth is less clear.

It is true State spokespeople have said the department has “no prohibition” on using personal email for work purposes.

As the Daily Dot pointed out in the days following the story’s break, numerous regulations existed before Clinton took office requiring each agency to retain all electronic records to transfer them to the National Archives and Records Administration (NARA).

The law seems to have not been followed to the letter: The State Department did not retain the emails. This 2010 memo explained email retention rules during Clinton’s tenure as secretary of state and the department’s own record-retention schedule explains the same thing: The secretary’s emails must be given to federal record keepers.

“Everything I did was permitted,” Clinton argued in July. “There was no law. There was no regulation. There was nothing that did not give me the full authority to decide how I was going to communicate.”

On the contrary, a 2005 policy memo outlines the State Department’s rules on communication.

“It is the Department’s general policy that normal day-to-day operations be conducted on an authorized [Automated Information System], which has the proper level of security control to provide nonrepudiation, authentication and encryption, to ensure confidentiality, integrity, and availability of the resident information,” the State Department’s Foreign Affairs Manual reads.

The State Department has said that the 2005 memo applies only to “sensitive but unclassified” material, meaning anything that can be withheld from a Freedom of Information Act request. That clarification came in March, before the State Department was able to look through any of Clinton’s emails.

In short, her use of personal email was almost certainly not permitted.

3) “Nothing she sent or received was marked classified.”

The Clinton campaign has insisted that any classified material on her emails was marked classified after the fact, making her “at worst a passive recipient of unwitting information that subsequently became deemed as classified,” a campaign spokesman said in August.

The intelligence officials endorsed a finding by I. Charles McCullough III, the inspector general for the intelligence community, who said two emails in Clinton’s trove contained top secret information.

The Clinton campaign disputed both accounts, pointing out that classification levels are often points of disagreement between various government agencies.

“Classification is rarely a black and white question, and it is common for the State Department to engage internally and with our interagency partners to arrive at the appropriate decision,” John Kirby, a State Department spokesman, said in a statement to the Times. “Very often both the State Department and the intelligence community acquire information on the same matter through separate channels. Thus, there can be two or more separate reports and not all of them based on classified means. At this time, any conclusion about the classification of the documents in question would be premature.”

It’s not possible at this point for either journalists nor the public to know the truth of what classified information did or did not sit in Clinton’s inbox. What the campaign argues about disagreements over classification is true, however, meaning an objective look at this question requires more waiting from the public.

4) “She provided all of her work-related emails to the State Department.”

Finally, Clinton’s campaign reiterated that all of her work-related emails are in the hands of the government now.

For now, this is a matter of trusting the Clinton campaign that admitted to unilaterally deleting over 30,000 emails that it deemed not work related.

Deleted emails can be recovered by experts depending on the details of the deletion, however, so a State Department investigation may yield answers.