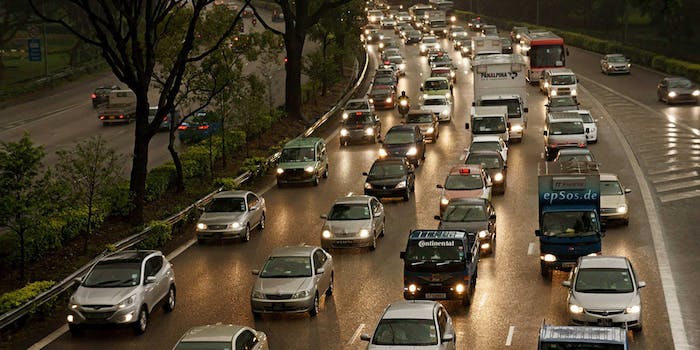 You know what's cool? Beating Google at its own game. And that game is traffic referrals.

In the lead up to the social network’s 10th anniversary, this has been a common refrain. The site is losing teens. It’s clogged with dads and aunts. And there are exciting new alternatives popping up everyday.

New data from Buzzfeed, the website that has taken social sharing to a whole new level, shows that traffic generated by Facebook outpaced Google referrals handedly in 2013, further proving that Facebook is far from irrelevant as the network enters its second decade of existence.

Though Google and Facebook began 2013 by providing roughly the same amount of traffic to Buzzfeed, the Web’s leading social network quickly outpaced its leading search engine. By the end of 2013, Facebook was providing 120 million more monthly referrals to Buzzfeed than Google. 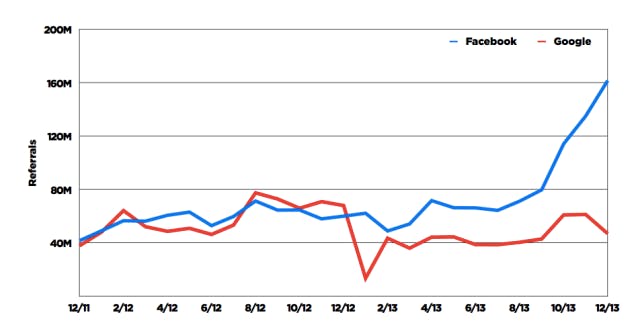 Facebook referrals to Buzzfeed grew steadily last year, no doubt aided by a change in Facebook’s algorithm that focused on putting more news and viral content in users’ News Feeds and fewer social updates from friends. As a result, traffic from Facebook to Buzzfeed grew from roughly 60 million monthly referrals in December of 2012 to 160 million in December of last year. At the same time, referrals from Google fell slightly to just above 40 million. (It’s also worth noting that Buzzfeed is one of Facebook’s media partners, though this generally means that Buzzfeed has access to more data from Facebook and shouldn’t impact the amount of traffic it sees from the social network.)

Though this data doesn’t cover the entire Internet, it does cover Buzzfeed’s network of some 200 sites—not an insignificant sample size. These number are also corroborated by a recent study that found Facebook outstrips all other social networks in terms of providing traffic referrals. In fact, Web analytics firm Parse.ly found that Facebook was second only to Google in generating Web traffic, besting Reddit and Twitter.

This is a bit of a Q.E.D. moment for Buzzfeed, which for years has been insisting that the Facebook model of social sharing is the future of Web content distribution.

“Facebook has risen over the last six months to challenge Google’s place as the most important source of traffic to online publishers,” Buzzfeed’s Ben Smith wrote in the Summer of 2012, when Facebook referrals were already on the rise.

Though these numbers can’t definitively prove causation, the Buzzfeed findings and Parse.ly numbers both indicate a spike in Facebook referrals shortly after the new Facebook algorithm took effect.

“It’s clear that referral traffic from Facebook drastically increased across all content, especially right around the time that Facebook announced the changes to their News Feed,” Parse.ly reported. “At the beginning of 2013, Facebook accounted for 1.8 percent of referral traffic to our network. At the end of 2013, it hits a peak of 5.7 percent.”

The algorithm change last year was aimed at turning the social network into the “the best personalized newspaper in the world,” according to founder and CEO Mark Zuckerberg. In a recent post marking the 10th anniversary of the site, Zuckerberg emphasised the social network’s new focus.

“I’m even more excited about the next 10 years than the last,” Zuckerberg wrote. “The first 10 years were about bootstrapping this network. Now we have the resources to help people across the world solve even bigger and more important problems.”

The shift from being a cool social startup to a driving force of Web traffic was inevitable according to Marcus Messner, an assistant professor in the Virginia Commonwealth University’s School of Mass Communication.

“Being hip does not make money by itself,” he told the Daily Dot last year. “And social media companies can only run for so long on venture capital. They have to grow up at some point.”