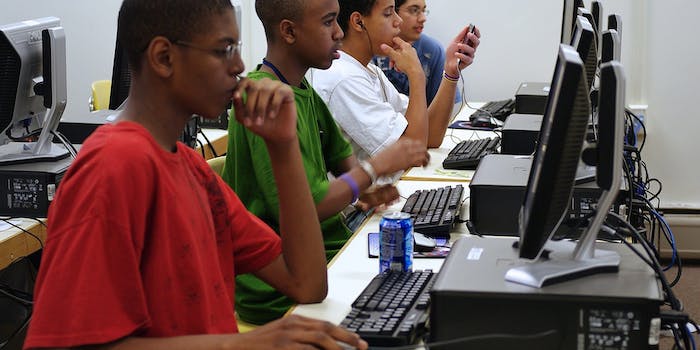 A recent study confirms a serious demographic shift among Facebook's user base.

In the earliest days of Facebook—back when a collegiate email address was still a prerequisite for membership—college students couldn’t wait to sign-up.

Now, a decade later, it looks like college kids and high schoolers can’t leave the site fast enough. New data shows that even as Facebook continues to expand its membership overall, the age demographic that was once its bread and butter is no longer interested in what the site has to offer.

While there have been rumblings in recent months about Facebooks waning appeal to teens and young adults, a report published this week by the market researcher iStrategy Labs lays out the data in hard numbers. Reviewing Facebook’s Social Advertising platform, iStrategy researchers determined that the number of 13 to 17 year olds on the site has decreased 25.3 percent since it conducted a similar study back in 2011. Among 18- to 24-year-olds, use declined by 7.5 percent.

At the same time, all other age demographics continue to grow, particularly those 55 or older who’ve increased their rate of usership by more than 80 percent in the past three years. If these numbers are accurate, it represents a substantial shift in the cultural identity of a website that was used exclusively by young adults when it first debuted.

It’s important to keep in mind that these numbers have not been verified by Facebook, which has not replied to the Daily Dot’s request for comment. And this data can only show who is on Facebook, not necessarily who is leaving the site, since many of the college students of three years ago are now the 20-somethings of today. But these numbers are evidence of reduced adoption rates among younger users.

The demographic shift within the world’s largest social network is a phenomenon that has been well documented (though with varying degrees of accuracy). Facebook Founder and CEO Mark Zuckerberg dismissed concerns about the site’s popularity among teens in July during the company’s earnings call.

“There has been a lot of speculation reporting that fewer teens are using Facebook,” Zuckerberg told investors. “But based on our data, that just isn’t true. It’s difficult to measure this perfectly, since some young people lied (about) their age. But based on the best data we have, we believe that we’re close to fully penetrated in the U.S. teen demographic.”

These steadfast assurances were reversed in October when Facebook Chief Financial Officer David Ebersman admitted for the first time that the social network has seen a “decrease in daily users among younger teens[.]”

The reason for Facebook’s declining popularity among youth is multifaceted, but according to Jesse Stay, co-author of I’m On Facebook—Now What?, the biggest reason may be that rising number of older adults on the site. Parents, teachers and bosses do not make for a “cool” social media experience, Stay told the Daily Dot last year. More and more teens are flocking to rival social networks where they can be less inhibited.

“The problem you’ll run into with older and younger audiences joining the mix is that what used to be ‘OK’ to share on these social networks is no longer such,” he said.