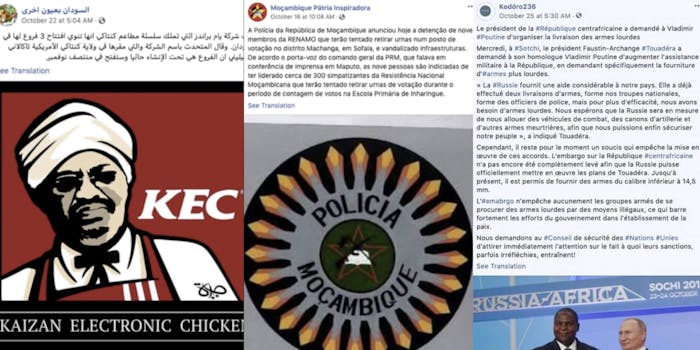 The networks reached hundreds of thousands of people.

Facebook today said it has removed three groups of accounts, pages, and groups engaging in “coordinated inauthentic behavior” that were linked to Russia and targeted a number of countries in Africa.

The social media giant said that the network of accounts, pages, and groups were targeting Madagascar, Central African Republic, Mozambique, the Democratic Republic of the Congo, Côte d’Ivoire, Cameroon, Sudan, and Libya.

“Although the people behind these networks attempted to conceal their identities and coordination, our investigation connected these campaigns to entities associated with Russian financier Yevgeniy Prigozhin, who was previously indicted by the U.S. Justice Department,” Facebook’s Head of Cybersecurity Nathaniel Gleicher said in a blog post.

Prigozhin was indicted by Special Counsel Robert Mueller as part of his investigation into Russian interference in the 2016 election.

They posted about “global and local political news including topics like Russian policies in Africa, elections in Madagascar and Mozambique, election monitoring by a local non-governmental organization and criticism of French and U.S. policies.”

One of the examples offered by Facebook included a post about the president of the Central African Republic asking Vladimir Putin to organize the delivery of heavy weapons. 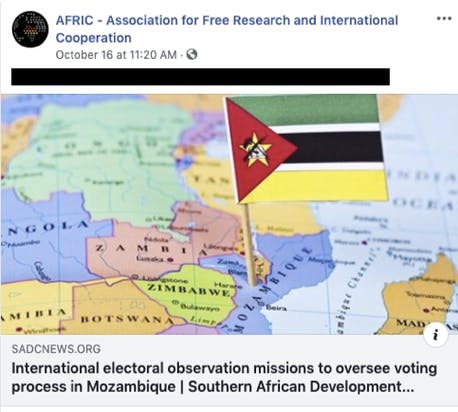 A network including 14 accounts, 12 pages, one group, and one Instagram account linked to Russia were also removed. Those accounts focused on Libya, the company said.

In August, both Twitter and Facebook announced that they had removed accounts linked to China attempting to sow discord amid the Hong Kong protests.

You can read all of Facebook’s blog post about the removal of the networks here.