It would be natural to think that Facebook functions a lot like high school. Just like ninth grade, Facebook is a place where people spend all day chasing popularity, taking pop quizzes, and attempting to avoid direct interactions with their parents.

However, according to a report by online marketing analytics firm Track Maven, Facebook is actually more like elementary school. Track Maven analyzed more than 1.5 million posts on 5,804 Facebook pages and discovered that just over two-thirds of Facebook posts coming from company brand pages are written at a fifth-grade reading level or below.

In fact, the most common reading level for a Facebook post was first grade. Only 2.5 percent of posts were written at a college reading level or above. 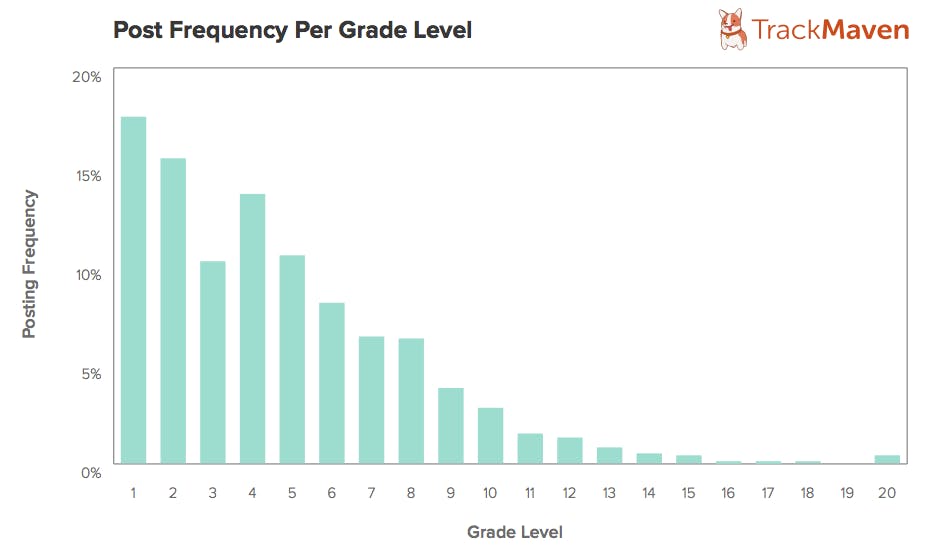 All of the posts that Track Maven looked at had generated at least 1,000 likes.

The Flesch-Kincaid readability test used by Track Maven to determine reading levels was developed in the 1970s by researchers working under contract with the United States Navy to determine the difficulty of reading the military’s technical and training manuals. The test determine a given document’s reading level based on the lengths of individual words and sentences.

Despite most posts aiming for simplicity and conciseness—with over half containing fewer then 20 words—longer posts tend to engender more engagement. A post with 180 words is likely to do five times better then one with only 20. 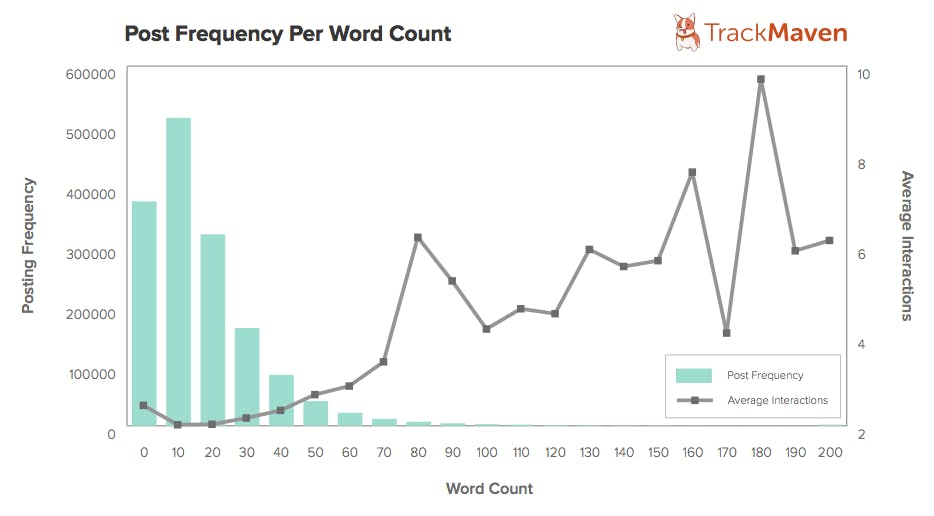 The report gives one explanation for why longer, more complex, posts tend to get higher rates of user interaction:

One possible theory behind the increased effectiveness of longer posts is that they benefit from the intrigue of Facebook’s “Continue Reading” link. According to psychology and behavioral economics professor Dan Ariely, our brains have a tendency to shift our preferences towards things we invest energy into due to what Ariely dubs the “Ikea Effect” … In this case, one possible explanation is that users are more likely to interact with posts that require a longer investment of time to read to completion.

It’s typically considered that the average American reads at about an eighth-grade level—so posts could likely afford to be a good bit more complex without sacrificing a lot of comprehension. According to Readability-Score.com, this article is written at a eighth-grade level and you’re understanding it, right?

Just because something is written at lower grade level doesn’t necessarily mean the writing contained therein in necessarily bad. Great works of literature like Elie Wiesel’s Night, John Steinbeck’s Of Mice and Men, and Harper Lee’s To Kill a Mockingbird are all rated at a fifth-grade level or below. Ernest Hemingway used a lot of short, simple sentences and he’s considered one the greatest writers all time.

Herman Melivlle’s dense symbolist tome Moby-Dick, on the other hand, is rated at a 10th grade reading level. A recent study by the Sunlight Foundation found that members of Congress speak at at 10th grade level.

In addition to determining reading levels, the report held a number of interesting insights. For example, it found that the average number of posts per day dropped off significantly, decreasing by about one-third, on weekends. However, the amount of interactions a post typically generated spiked on Saturdays and Sundays. In essence, a smaller amount of content is posted over the weekend, but what little content that is published tends to get shared and liked more often.

The report’s authors saw a similar dynamic at work in the time of day a piece of content was posted. While there were far few posts going live between 5pm and 1am than occurred during working hours, evening posts tended to get more clicks, likes, and shares.

Just like elementary school (or cable news for that matter), the louder a post seems the shout, the more attention people tend to pay to it.

In summation, brands of Facebook seem to think we all have the mental facilities of 10-year-olds, but really we just like it when people excitedly shout at us.