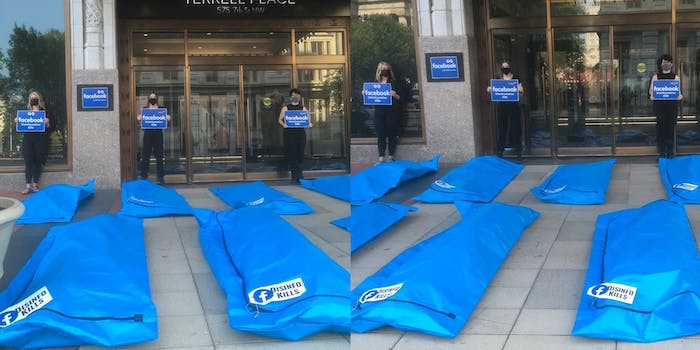 The body bags have tags on them that read 'disinfo kills.'

Protesters lined up blue body bags outside of Facebook’s Washington, D.C. headquarters to criticize the spread of misinformation on the platform.

The protest, which was organized by the “Real Facebook Oversight Board,” also comes as the group of activists released a report about the prevalence of anti-vaccination content and misinformation on the platform.

Photos of the protest show numerous blue body bags in front of the front door of the company’s office in D.C. The bags have a tag on them with the social media giant’s logo and the words “disinfo kills.”

The protest was scheduled on the same day that the social media giant was releasing its second-quarter earnings report.

“People are making decisions based on the disinformation that’s being spread on Facebook. If Facebook is not going to take that down, or if all they’re gonna do is put out disclaimers, then fundamentally, Facebook is participating in these deaths as well,” Shireen Mitchell, a member of the Real Facebook Oversight Board and founder of Stop Online Violence Against Women, said in a statement.

In a tweet, Facebook spokesperson Andy Stone said the activist group was engaging “in cheap stunts” with the protest.

The protest comes after a week-long fight between Facebook and President Joe Biden about the spread of coronavirus-related misinformation.

Earlier this month, Biden said platforms like Facebook were “killing people” by allowing misinformation, specifically about the coronavirus, to spread. In response, the company shot back aggressively and accused the administration of “finger-pointing.”

In a blog post, the social media giant said that “vaccine acceptance among Facebook users in the U.S. has increased.”

Biden eventually walked back the “killing people” remark, saying: “My hope is that Facebook, instead of taking it personally that somehow I’m saying Facebook is killing people, that they would do something about the misinformation.”