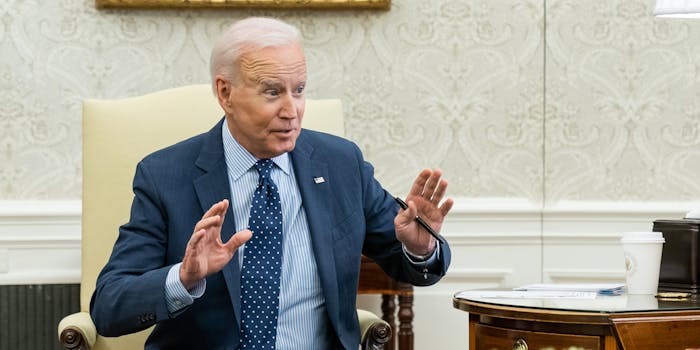 The White House and Facebook have been going back-and-forth recently.

President Joe Biden tempered the rhetoric between his administration and Facebook on Monday, the latest in a back-and-forth the two sides have had over the last several days regarding coronavirus misinformation online.

Late last week, Biden said platforms like Facebook were “killing people” by allowing misinformation, specifically about the coronavirus, to spread.

The New York Times reports that the remarks came after weeks of the administration trying to have Facebook give them information about how they were combating vaccine misinformation.

In response to Biden’s remarks, Facebook shot back aggressively at the administration. In a blog post on Saturday, the social media giant said the White House was “finger pointing” and asserted that “vaccine acceptance among Facebook users in the U.S. has increased.”

Guy Rosen, Facebook’s vice president of integrity, wrote in the blog post that Facebook was “not the reason” Biden’s goal of reaching a 70 percent vaccination rate in the United States by July 4 wasn’t reached.

After Facebook’s blog post, Surgeon General Vivek Murthy said in a CNN interview on Sunday that social media platforms “have to recognize they’ve played a major role in the increase in speed and scale with which misinformation is spreading.”

But after the back-and-forth over the last several days, Biden walked back on his “killing people” remarks. Biden also referred to the so-called “Disinformation Dozen,” which according to a Washington Post reporter, is a small group of anti-vaxxers who push an enormous amount of vaccine disinformation on Facebook.