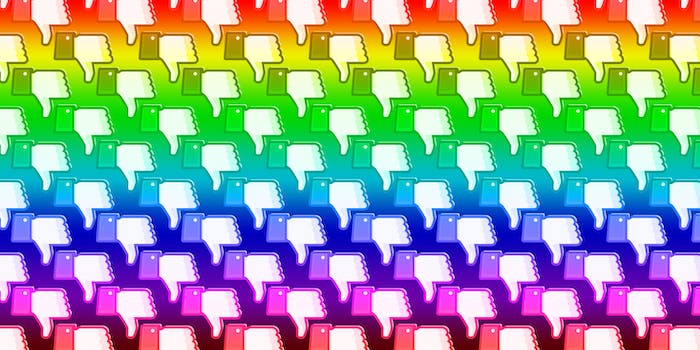 LGBT groups gear up to protest Facebook with #MyNameIs movement

Facebook‘s real name policy wars are far from over. With its broader userbase placated, the social network’s practice of requiring its members to use their “real” names continues to bear disproportionately negative consequences for the LGBT community.

Now, a cluster of frustrated Facebook users—a diverse group comprised of “drag and other performers, transgender people, immigrants, [and] domestic violence survivors”—has coalesced around the hashtag #MyNameIs. The group will protest the social network’s policy at Facebook’s Menlo Park headquarters on June 1—the first day of LGBT pride month.

“We are really pushing for Facebook to remove the Fake Name reporting option,” the activist and drag queen Sister Roma told the Daily Dot. “Suspending an account for using a ‘fake’ name punishes identity, not behavior.

“As the #MyNameIs team has been requesting from the beginning, as long as Facebook has the ‘This Timeline is Using a Fake Name’ option in their reporting menu the malicious targeted bullying and account suspensions will continue for the millions of users with authentic chosen identities that cannot be proven by a piece of paper.” 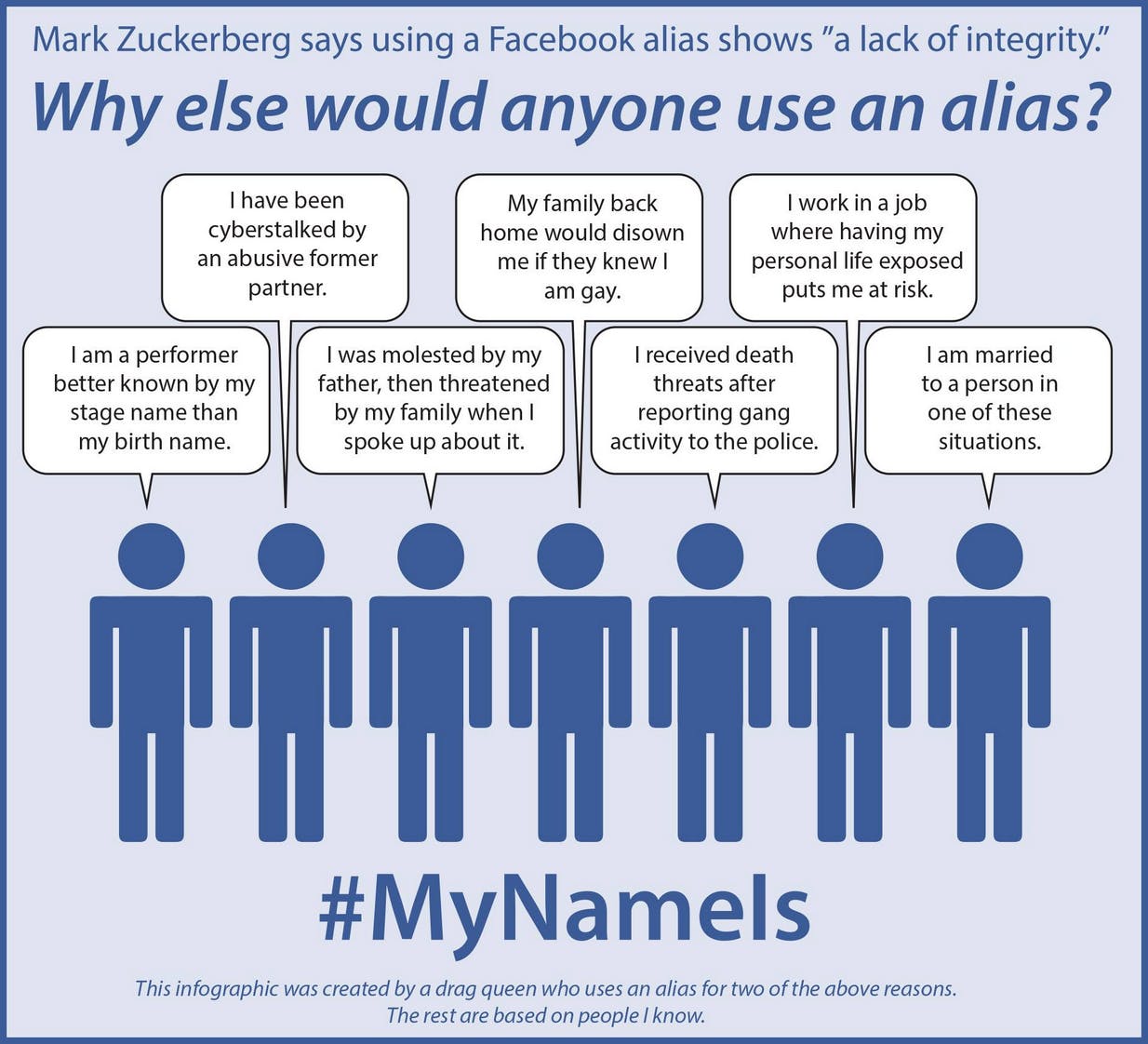 Sister Roma, a longtime member of San Francisco’s Sisters of Perpetual Indulgence, became something of an unpaid community liaison between Facebook’s policy team and members of the LGBT community who found their accounts suddenly suspended.

“Facebook is scurrying to reinstate the individual cases we sent them over the past 8 months,” Sister Roma wrote in a Facebook post on May 7. “They hope to [defuse] the situation and make all of you feel content when your account is back—they’re even sending out an ‘apology’ which is no more than an autobot reply. DO NOT BE CONTENT.”

The #MyNameIs mission statement captures the disconnect between Facebook’s PR efforts to placate detractors and the reality of the situation:

“In October 2014, the #MyNameIs Campaign received a public apology from Facebook and a commitment to allow all users to express their “authentic identities,” however we have yet to see substantive change in the company’s policies or procedures and are continuing to apply pressure.”

The #MyNameIs campaign is calling Facebook’s bluff: While the company claims to have adjusted its policy, the changes remain superficial and the system is still open to abuses, like RealNamePolice, an anonymous user the Daily Dot interviewed in October 2014 who claimed responsibility for reporting thousands of Facebook accounts, many of which were suspended shortly thereafter. The Daily Dot continues to receive reports on a weekly basis from suspended users who are part of the LGBT community. Often those users find little recourse in their efforts to get their accounts reinstated.

Update 5:40pm CT, May 11: Facebook responded to the Daily Dot’s request for comment by noting that just last week, it added a seven day grace period, “allowing people continued access to their profiles while they work to verify their name.” Previously, accounts were locked at the same time that a request for verification was issued.

Sister Roma has joined fellow drag queen Lil Miss Hot Mess to call for a ban on Facebook’s participation in the San Francisco and New York LGBT pride parades. At the time of writing, the petition had nearly 2,000 signatures.

“Many of us, especially trans men and women, do not have any government-issued ID that reflects our authentic identity,” reads the petition’s description. “Our community is disappearing from Facebook—and they’re letting it happen. Do not let them march in our parade!”

While Facebook still seems flummoxed about a potential solution to its name policy, Sister Roma has proposed a way to verify identity that’s often used during Reddit‘s Ask Me Anything (AMA) threads.

“We’d also like Facebook to stop requiring ID to prove identity,” Sister Roma told the Daily Dot. “There are several other options to prove one’s authenticity. It could be as simple as holding up a photo with a sign stating your name and today’s date, a very common practice on social media.”

For Facebook, it’s just more free advice from some of the platform’s most vulnerable users.