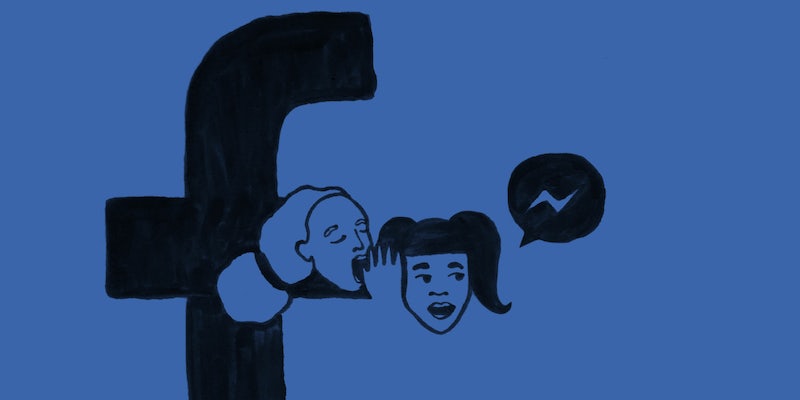 The company has safeguards to convince users it's not exploiting kids.

Facebook has a staunch policy against accounts for children under the age of 13. With a new app, however, it becomes the first major social site to expand its reach to young children, giving kids and tweens a chance to join the online conversation.

“Messenger Kids” is a child-friendly version of the company’s immensely popular chat app, complete with a suite of parental controls. Its aim is to offer chat and video features to a younger group of users while giving parents the ability to monitor who their kids interact with online.

The kids’ version of the app lets children chat with folks using Facebook Messenger. They can share texts and video chats but with additional precautions preventing them from sharing nudity, sexual content, or violence. Facebook gives users of this app a more playful set of masks they can use in video chats and access to a filtered, kid-friendly version of GIPHY for GIF-sharing.

Parents concerned about their child having a social media account need not worry—Messenger Kids is controlled entirely from the parent’s Facebook account. In fact, children under the age of 13 can’t legally create a social media account, according to the Children’s Online Privacy Protection Act (COPPA).

To start using Messenger Kids, download the app from the App Store and authenticate your child’s iOS device with your Facebook credentials. Then, create an account for your child by typing in their name. This essentially gives them a separate identity under the umbrella of your account—it doesn’t create a new Facebook account for your kid. It doesn’t give them access to your account, either.

From there, you can start adding contacts and hand the app over to your child. Parents have full control over who can contact their children. To add contacts, in your Facebook app, head to the Messenger Kids parental controls section (located under the “More” tab in the bottom right of the app). Relatives or older siblings who already have a Facebook account only need to create a Messenger Kids profile to become searchable in this section. If a child wants to chat with a friend from school, both kids’ parents will need to add each other and give their children permission to contact one another.

These safeguards are put in place to shield children from the dangers of the internet, defending them against harassment, bullying, and predators, among other problems social media sites are struggling to address.

To further convince people it’s not exploiting young children, Facebook says Messenger Kids will be free of ads. The company addresses the concerns it recognizes parents will have with the app in a blog titled “Hard Questions: So Your Kids Are Online, But Will They Be Alright?” In it, Facebook claims it spoke to more than a dozen advisors in the areas of child development, online safety, and children’s media and technology to make its app safe.

Facebook also says Messenger Kids is a response to the increasing number of children using connected electronics like tablets and smartphones. A study from research firm Dubit claims 93 percent of children six to 12 years old in the U.S. have access to tablets or smartphones, and 66 percent have their own device. A study conducted by Facebook and the National Parent-Teacher Association shows three out of every five parents say their 13-year-old is already using messaging apps, while 82 percent say kids started using social media between the age of 8 and 13.

Still, if you thought Facebook created the messaging tool solely to give parents an online haven for their children, think again. Like a university giving elementary school students a filtered, utopian tour of its campus, it appears Facebook is doing what it can to onboard the next generation of users before they’re ever introduced to its rivals. It’s this approach to building the largest possible user base that was recently slammed by former Facebook president Sean Parker, who said the social site is “exploiting a vulnerability in human psychology.”

He even eerily questioned what effect Facebook might have on children. “[Social media] literally changes your relationship with society, with each other … It probably interferes with productivity in weird ways. God only knows what it’s doing to our children’s brains.”

It’s important to note that Messenger Kids doesn’t track kids’ behavior (per COPPA), and it doesn’t automatically shift users to a true Facebook account when they turn 13.

Facebook is launching Messenger Kids on iOS on Monday. It will be available in the Google Play Store and Amazon App store in the “coming months.”