Meet Dom, the Facebook Messenger chatbot that will deliver pizza to you

It's always a good time for pizza.

You will be able to order from a full pizza menu straight from your Facebook Messenger app, and in time for the Super Bowl.

Domino’s will soon bring its ordering bot to Messenger—where pizza-hungry users can order off the full menu without needing a pizza profile account. All you need to do is add Domino’s to a new chat on Messenger, and Dom (get it, it’s like Domino’s, but shorter), the company’s chatbot, will walk you through the process.

But there is a catch. 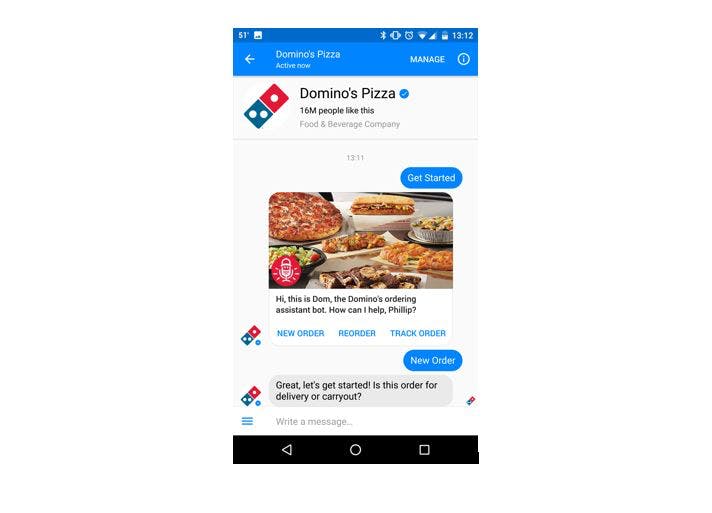 You can only pay with those old green pieces of paper that people used to buy things with, which may not go so well considering the demographic you’d expect to use something like a chatbot on a mobile application. The solution to having to pay with cash may be worse than the problem: carryout. If you decide to pick up your pizza, you can pay with whatever method you’d like. Domino’s did say it was looking into mobile payments on Messenger, according to TechCrunch.

Despite its faults, Dom is in many ways an improvement over the company’s other automated ordering services.

Domino’s uses automated ordering on other platforms including Twitter, Apple TV, Google Home, Amazon Echo, and even some smart TVs, but those use the company’s limiting AnyWare ordering service.

Unlike Dom, AnyWare requires a profile, and does not feature a full menu of deliciousness. Instead, users must use an “Easy Order,” or a list of your favorite, most frequently devoured pizzas. That may not work out so well when hosting a Super Bowl party with angry fans requesting eight different pizza combinations.

Domino’s expects to sell 12 million pizzas during the Super Bowl, some of which will be ordered through the app everyone loves to hate.